Renting an apartment in Russia is a little different than in the States, but I don't have much experience with either one...so at any rate I was bound to learn something... 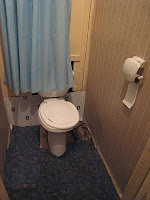 I had always found housing via friends and acquaintances, and tried to go that route this time as well, but it was harder because I was looking for an apartment to rent, not just a room or corner of a room. read more/-

The initial attempts were fruitless. Apartment #1 looked promising, but the current tenants decided to stay. Apartments #2 and #3 were in bad neighborhoods. Apartment #4 went to a married couple instead. But the other problem was that it felt like living in someone else's home. Apartments often come fully furnished, and you are often not allowed to change configurations. Or, for example, a family has purchased the apartment for themselves or their children, and are renting it out as they pay off the mortgage. So every hole in the wall, every piece of decor, affects them personally.

The other options here in St. Petersburg are real estate agencies or the Classified ads. Something didn't feel quite right about scanning the newspaper and calling up strangers, so I decided to use a Realtor. Well, they were practically strangers as well, but qualified ones, at least.

The search dragged on much longer than I had expected. I expected the Realtors to produce a list of options fairly quickly. Then I would look at them, make a comparison spreadsheet, and choose the best one. Agent #1 produced a single option that didn't even fit my criteria. I called a second agent, and she never even called me back. Did they not need my business?

I took a risk and contacted a third agent (supposedly Christian) whom I had found on the Internet. He did get in touch with me and asked a lot of detailed questions about what I was looking for. It sounded more promising. But then another week or two went by, with no word...

Meanwhile, Current Roommate's mother came to visit. When hearing of my trouble, not one for wasting time, she grabbed the phone and called her friend, another agent. She asked for a 2-room apartment for me, reasoning that if I wanted a roommate, we ought to each have our own room, being adults. Within a few minutes there were 4 apartments available for viewing.

I called a potential roommate and let her know, and she was all for looking at a 2-room. But...she needed a different neighborhood. None of them would do.

Back to square one.

A few hours later, Agent #3 called. Did I still need his services? Yes. I told him the new criteria and he promised to take a look.

But I was leaving in 2 weeks. I kept reminding myself about my residency application and other last-minute developments, and I knew that God would provide at the right time.

Another week passed and Agent #3 called and asked if I could go look at apartments. I suggested we meet the next day, and he said he would call back.

At 3:30 pm the next day I got the call that we could go look at a few apartments. Future Roommate and I met up at the appointed meeting place, but had no time to discuss our game plan, as Agent #3 arrived at about the same time. I had no idea how this was going to go.

We set off on foot to look at the first apartment, Agent #3 getting turned around a few times before we found it. 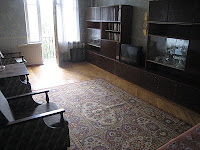 Apartment #1 had potential, but something wasn't quite right. We weren't in love.

We planned to think it over, but Realtor lady (who was showing the apartment) said that the Owner was about to leave town that very evening. I was trying to keep my guard up in case anything suspicious was happening, but we didn't want to lose that apartment. 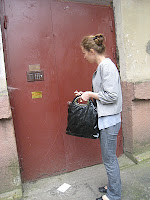 So the next thing we knew, the Owner was on his way over and we were signing some papers.

I hadn't brought money with me because it seemed a bit foolish to be bringing large amounts of cash into an uncertain situation.

I'm not really sure what Agent #3's job was, other than to lead us to the right address and try to get the price a little lower. But oh well, it was extra moral support.

Realtor lady said that we could bring the money to her office the next day and she would give us the keys.

But alarms were going off in my head...I imagined her giving us fake keys and the "office" disappearing from existence.

I suggested meeting at the apartment so that we could try the keys right away, and everyone else agreed. Of course, they could have always changed the locks later if they wanted to trick us, but I felt a little more in control, at least. 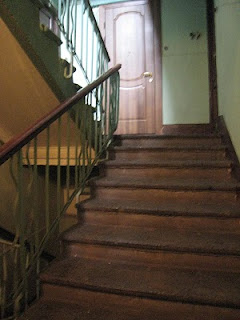 So less than 24 hours later, we had the keys and were standing in the middle of our new rented apartment. Lots of adjustments to make (with the owner's permission), but it has a lot of potential!

I looked for almost 2 months and then found something in less than 24 hours...how is that for crazy? I guess it is common for your name to just sit on the Realtor's list until you get a phone call and go on an apartment-search marathon. Good to know...
at June 26, 2010