I feel like I've been so boring lately as far as blogging goes, and at the moment I'm really focused on getting ready for vacation; so excited, although there is a lot to do. The weather reports for the UK (where we're going) have been the same as here, cool and rainy. Should feel like home! :)

I wish I had some deeper thoughts to share, and I want to believe that I'm continuing to grow and challenge myself, but sometimes it is hard to rise above the everyday stuff and see a bigger picture.

As I was compiling a little list of things to share, I was again starting to feel like it was all sounding kind of banal or self-centered. But at the same time there is a lot in me that's changed since becoming a mother (and it might be a different milestone for different people), and certain topics can be huge emotional triggers. It is hard to read the news or think about some of those hot topics, like abortion... at least without digging deep!


1) Watching Doc Martin. Hadn't heard of it before getting Netflix, and hid it in my list since I didn't think Andrei would be interested. But it's been my company lately while washing dishes. I've enjoyed seeing some of the character development as various people deal with their own personal "demons," and especially the relationships. Not to mention some creative storylines, and the setting is beautiful. Almost makes me want to live there.


"Summer is a mini-lifetime" is my loose translation of a popular Russian saying. I suppose a lot can happen in a whole quarter of a year!

But in general summer usually starts out with a list of hopes and dreams and some grandiose plans...and then before you know it, September is just around the corner. Were your expectations met?

Sorry if I'm getting ahead of myself here...don't worry, I'm not going to talk about Back-to-School. ;)

This has been my first summer in Russia in awhile... probably since the summer we were married (4 years ago), and even then we spent 3-4 weeks in the U.S. I used to focus more on being home for Christmas, and now summer is the best traveling time for our family. But not this year...we'll be traveling for just 2 weeks in August, and other than that have been around St. Petersburg!

I was hoping to get a lot of projects done this summer and we have a lot of friends to catch up with. But we've had a cold going around and have gotten behind on everything. We barely just got caught up on family birthdays, and I'll be lucky if I even hand in my Immigration form before we leave on our trip!

I will say that weather always seems to play a role in how summer goes. Funny, is it that way for other seasons, too? This summer has been cool, and I am incredibly thankful for that. Although we've yet to spend a full summer in this apartment, I can imagine how 2-3 months of heat during White Nights would be a lot to endure. So I have been relishing the cool breezes, admiring the rainstorms (from inside), and appreciating the occasional warmer day. Plus-no mosquitoes!


After the last time I wrote, everything came screeching to a halt as we got a family cold. Andrei felt very sick and David had a pretty bad case, too. David even now seems a little sniffly. I had my usual kind of malaise for a few days and the general feeling that I was fighting a virus, but no other symptoms.

It's been a very mild summer, and right now I am enjoying a terrific summer rain/thunder/hailstorm going on outside the kitchen window. Hopefully it will clear up in another 3 hours when I need to leave!

A blog friend recently did a fun post about some favorite foods and kitchen tips, and I thought I would share a few as well, including things that David is into.


In no particular order...

If you've been to Russia, you know this dish. It's the one that's sort of marinated, not the one with mayo. A little zesty, with coriander as the key spice. It's usually recommended that you use a mandoline slicer to get the right-size carrot pieces, with just the right amount of crunch. David loves it! It's good with onion, but we leave it out for picky eaters. We cheat and use a spice mix, but there are some recipes online, like this one: http://shesimmers.com/2010/08/russian-korean-salad-корейская-морковь.html 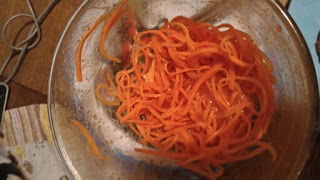 
I had a busy week, but there was something different about the intensity. It was one of those times when it felt like my problem-solving skills had to be on constant alert! I used to have these kinds of adventures all the time, especially when first living in Russia, or during seasons when I would be commuting to all different parts of St. Petersburg each day of the week. Times when you have to be thinking, thinking, thinking. Like when it would take me an eternity to find someone's home; the public transportation route, street name, building number, entryway, apartment number, floor, and door code all in my head or scribbled on one or more scraps of paper.

That was the kind of week I had, including a meltdown halfway through! But it's not meant to be a complaining post, and/or bragging about how "busy" I've been. Just doing some reflecting about some experiences, and thinking about why I might have felt overwhelmed.

-Commenced making a cake for an event, using a new recipe. Failed twice (complete inedible disaster), then ran out of time.
-Was called into the bank to "fill out a form." Didn't understand what/why or how to fill it out. And the bank employee didn't either. Left feeling confused.
-Headed over to worship practice for the first time in the new building, but didn't know where to go! After waiting around for about 10 minutes, received a call from the worship leader, who came out and led me to the new room.
-Got home around 11pm, found a new cake recipe, and finally had success, though I had to calculate carefully since I had very few ingredients left at that point!

-Got up early to get ready for the church baby shower: presents and cake all packed up; had to figure out how to stop along the way for fresh strawberries and some other last-minute ingredients; took the metro and then a tram and then circled the buildings looking for the hostess' apartment...
-After arriving, got all the cake layers assembled/frosted/decorated/etc....whew.