Andrei and I felt unexpectedly blessed to be back at church on Sunday. We hadn’t necessarily been homesick, but we really felt at peace to be back. I think part of it was that it was good to return to the context where we first got to know each other. Many things in marriage are new to us, but if we go back to serving each other as we did in the past, it will be a constant. We were fellow members of the Body before we belonged to each other exclusively.
We serve together, but in different roles. We notice needs, but from different perspectives. And then come together to share.
Of course another, more human part of it is that it’s good to feel useful. But while it's nice to hear that we were missed, we know that everything was perfectly fine, if not better, in our absence. :)
A new school year is starting, and this, too, feels familiar. NOW the creative juices are flowing and the fingers are tapping away at the keyboard making lesson plans. We are getting back into the rhythm.
But churches change, and jobs can change. So it's important to remember even in the midst of contentment that many circumstances are variable. We won't always have this routine. But Christ is the same, and the gifts He gives us can be used in a multitude of ways.
at August 31, 2011 2 comments: 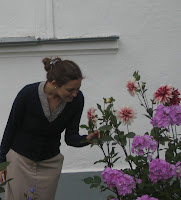 I remember a time when my only lover was God. He was the only one who knew my innermost secrets.

It is quite possible to be single and not a bit lonely, when you have a Faithful Friend. Of course you can wonder about the possibility of having a companion, but it is not necessary to be sad, because single life can be quite full. But I am already losing the perspective I had then, so I'm glad to have journal entries to remind me.

I was lying awake due to jet-lag a few nights ago, while a special person lay snoring sleeping next to me. I wondered...had anything really changed in the past month? Here I was, lying awake again in the darkness...hadn't I forgotten about Someone who used to keep me company?

When Andrei and I were on vacation, we got up fairly late, and it felt awkward to separate for individual prayer time. We did everything together. Sometimes we would both sit at our computers, though not for long. Maybe in the evening I would read a chapter or two while Andrei journalled. But in general, it was hard to get motivated to go off by ourselves and pray separately. I remember going through a similar thing with my college roommate-we had just met, and were sort of getting along, but how do you interject into a conversation (or even a lull), "I don't want to talk right now"? Finally I just pulled out my Bible at my desk and she did the same, and it worked out.

Now that it's fall Andrei and I will both be very busy again, and it will still be hard to discipline ourselves to spend time with the Lord. But on the other hand, we'll be out of the house at different times, so there will be opportunities for reflection. I am glad at least that jet-lag served as a reminder to seek companionship with my Heavenly Father.

It was interesting to reminisce as we arrived at Pulkovo airport yesterday after a honeymoon trip.

Last summer, Andrei met me at the airport as I returned from a trip to the States. He often did this to help me out, even though it meant carrying one of my 50-pound suitcases in each hand as we took a bus, then the metro, then made our way up to the 4th floor or wherever I was living at the time.

But the thing is that we weren't dating at that time. So last July I was standing there at baggage claim, very glad that Andrei was waiting outside, but wishing that he had a deeper motive for meeting me at the airport. A hug would be nice, or flowers...or a surprise declaration of love? Then again, that would have been rather odd as we hadn't discussed anything beyond friendship, at least in any more than hypothetical terms.

He met me as promised in the waiting area, and accompanied me and my bags all the way to the new apartment where I was going to be living. The one where he would help me move furniture and come pick me up for our first date a month later (but neither of us predicted that, of course.)

And now we are back in the neighborhood where we first met, when I was living here 7 years ago, in the building next door to him, and wondering if he was ever going to come courting. We're back from our honeymoon and settling into our first shared apartment.

We had such a wonderful wedding! Maybe everyone says that about their own, but almost a week later we are still feeling so touched and grateful to everyone who helped to make our day meaningful. More later... 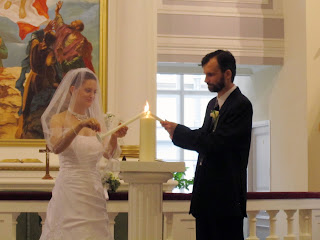