When You Don't Want To Go To Church (Part 1)


The problem with infrequent posts is that the more time that goes by, the fewer posts that make it by my personal filters. Lots of them are sitting in draft purgatory, until I get passionate about them enough to keep going and finally hit "publish."

Here's a topic that comes up every once in a while. See what you think.


Sunday morning church-going is a habit that was instilled in me as a child. I realize it may be partly a cultural thing, but I view it as a key part of being able to hold onto my faith (while God held onto me). No, I don't always feel spiritually-engaged, but it's a discipline, just like reading your Bible (which I'm worse at)-you just keep doing it and trust that it is taking root and will eventually bear fruit.

There are people who go to church and don't believe, but this post isn't about them. This post is about people who believe, but don't go to church. I find this a quite perplexing problem. To me, a person who has found God will inevitably be drawn to fellowship. This begs the question: does it have to be a specific body of people that meets regularly?

Andrei and I role-played a bit about this, after discussing an article about Christian "free-lancers." These are people who freelance not as a job but as a church member. They visit 2 or more churches, having friendly relations with people in each. They hang out with believing friends during the week and attend various church events. They might participate in an occasional service event. And they consider this flitting about a perfectly legitimate form of fellowship. (note: I haven't read "Stop Dating the Church" by Josh Harris, but I'm thinking maybe it hits on this?)

Well, I thought it was ridiculous. Okay, inter-church fellowship is great, but if you are not in any one church for less than 50% of the month, are you really committed? Can you really have meaningful relationships in that situation? Are you really participating in the life of the Body? And what about accountability?

But my main point was that people who can't commit to one church probably have some other reason. I think there is some hurt or fear or resentment beneath the surface. But I can't prove it. So I guess Andrei won the role-play. I can't prove that people can't be content without Christ, either. It's not a logical argument sort of thing.

Revisiting the church attendance thing, though. What keeps you from going to your main church on a Sunday morning? 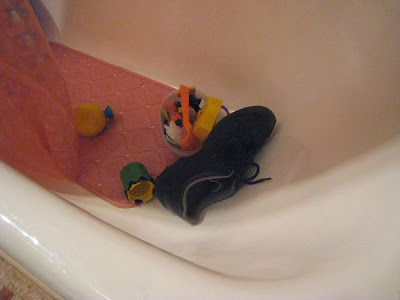 Some of the mommy parenting forums I've been on mention Montessori set-ups at home. For example, I ran across the idea that a child's room should have everything at the child's eye level. I have to say that a part of me is skeptical. I don't see myself running out and buying/making a child-sized version of everything for David. However, I do have a few ideas for him in mind. And it sure is fun to set something up and see him enjoying it later.

Part of the reason I DON'T want to go overboard is that you can't always predict what a child will find interesting. He doesn't want plastic car keys-he wants yours. He doesn't want a toy house, he wants a cardboard box.

David has gotten to this phase where he likes lounging around on pillows or just the floor. So I decided to pile all the extra blankets and pillows together to make him a reading corner. (sorry, potential houseguests)

So here are A) the reading corner and B) where he actually likes to hang out.

I also had the idea to make him a cozy place to hang out in our bedroom while I'm doing things like putting laundry again. Here again are my attempt and his own choice:

And finally, David needs a place in our home office when Daddy and/or Mommy is working on something. We even got him his own little hideout, hoping to distract him from his favorite precarious perch, on the ledge under Daddy's desk. But he still likes to play at Daddy's feet.

Too many late nights, so I won't write a lot today. This will be a photo post. I am trying to start carrying my camera around again.

Our entranceway could belong to almost any building in this city. This article sums it up well. Our particular building layout features a heavy door, followed by another doorway, followed by half of a flight of stairs. The first landing has the first 4 apartments, with an information display on the wall, then the single tiny elevator, and another 1/2 of a flight of stairs up to the mailboxes. After that it continues with the double flights of stairs. The apartments/elevator landings alternate with landings that have openings for the garbage chute.

Getting back to that entrance...notice that it's not handicapped-accessible. Very few buildings are! Yet the custom for any family with a baby is to take the child out in a huge stroller for at least 2-3 hours a day! Do you think a little staircase is going to stop them? Judging from the view from my kitchen window, those mothers (and fathers and grandmothers and grandfathers) have figured out how to navigate the elevators and stairs and heavy doors pretty well.

So how did we do it? Well, we didn't! Poor David only got "walked" when his grandmother was over or when his mother and father were really on top of their game and his father helped everyone get outside. I think I got to the point where I could make it down the stairs, but not back up. Forget going to any stores-same situation with the stairs, and the aisles aren't really big enough anyway. Now we have a lighter stroller and I can handle it.

Then this contraption appeared recently in our entranceway. A ramp that stows away. It lies flat against the wall and when you need it, you slide the lock to release so that it will lie on top of the stairs. I haven't tried it yet though as it might not be the right width for the stroller. It takes me about 30 seconds to hoist the stroller up the stairs on its back wheels. Not sure if setting up the ramp would really save any time. Still...every once in a while there are these flashes of practicality. I wish it would happen just a little more often!

When we were in the U.S. over the summer, I wanted to check with my doctor about the belly splints recommended by diastatis recti rehab programs, to see if I was eligible. It isn't something a U.S. doctor had ever recommended to me, although my Russian doctor had and I didn't listen.

At my appointment (at a new practice), the doctor said, "it won't close any further without surgery." That was it. No splinting, no rehab, just major a little abdominal surgery.

So I didn't get a splint.

Back in Russia, I continued to work on Fit2b's tummy-safe exercises, focused on my core. But I didn't really feel a difference. Couldn't even really feel my muscles working, belly or not.

I was frustrated and didn't want to leave the house tired of looking pregnant and none of my clothes fitting. Andrei brought up the splint thing again, and on my way home from Immigration one day, I stopped off at the maternity shop. They had a whopping two options, post-operational/C-section aimed, but I bought them both. I put them on under my clothes and basked in the slimmer profile.

The thing about splints is that there are different types used for different purposes. Just like with the exercises, the equipment also has to be specifically appropriate for diastasis recti. But I was told that "something is better than nothing," so I wore the splints I had bought, just being sure not to compress my stomach too tightly.

Then I sort of got into a rut where I wasn't doing the exercises at all regularly, but tried to wear the splint as often as possible and do my core breaths. When I would take the splint off, out would pop the 5-month pregnant-looking bulge. Back to reality.

The other day I was doing my core breaths in front of a mirror when I realized I could suck my stomach in all the way! Way different compared to in the beginning when my "engaged" position still showed a pretty big bump out in front. I also am almost back to having a belly button at this point.

So I think it's safe to say that splinting is a huge help! My stomach has definitely gone down, though it still looks, well, like I had a baby.


Note: This is not a sponsored post. I just haven't found a lot of other sources on the Internet, so I often reference the same one. :) And I really do recommend it.