The wedding is three months away and Andrei and I have virtually no photos together, aside from a few candids. I used to scoff at the idea of "engagement" photo shoots, but now I understand why it is a good season of life to immortalize.

We haven't been able to schedule a photo shoot for various reasons, but we were walking in the park on Sunday when we suddenly ran into a friend from church, camera in tow. Before we could even react, he snapped our photo. And there you have it. 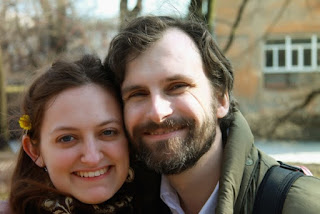 Everything is going pretty well with visiting the orphanage regularly. I do a lot of tutoring English. I also witness a lot of the kids' "growing pains," since I sit at a table right in the middle of their group. Oh, the drama.

Some time ago I mentioned a new girl, Dasha. As new kids have been coming in, I've been noticing the power struggles. A new kid either makes a name for himself among the other kids by doing something bad early on (skipping class together, obtaining cigarettes, etc.), or he keeps to himself and is ostracized.

Unfortunately, Dasha hasn't made a friend in the group. She has not even acquired a "partner in-crime," which is how so many of the friendships start out. The counselors praise her studiousness, though they do not seem to be doing anything to help her develop her social skills. I saw her giggling a little when the boys teased, and I thought perhaps she was going to break into normal adolescence. But the teasing took on more of a taunting nature.

Her studiousness, frank manner, and nervous tics have become fodder for rejection by the rest of the group. I hoped so much for her that she either didn't care about the foolish words from others, or cared enough to try to break out of her shell and make a few friendly gestures.

"I am going to appeal to the director to leave this group," she announced recently, as the other children and counselors snickered. I wished I could just lend her a little patience to get through the next few years. While "behind" in some ways, she is simultaneously more mature than the other kids, since she doesn't play their little games.

I was reminded of the film "Chuchelo," a very compelling Russian film in which a young girl is ostracized by the rest of her class. It's similar to "Lord of the Flies" in that it depicts some frightening human tendencies that surface in group situations. I very much hope that Dasha will cling to the few positives in her life and not continue to be a victim of society or of her own troubled past.

It's a good thing the Easter cakes were officially blessed by the priest yesterday! That means we can eat them, right?

Apparently the priest personally showed up personally at the grocery store to perform the honors. Typically, people take their Easter eggs and cake and I don't know what else to church with them to get the food "blessed" before the Easter feast. 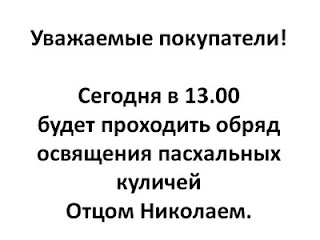 I was looking for some hymns online and came across this family of singers. I was so inspired by their crisp harmony, so worshipful. I almost wanted to dance!

Listen to "How Beautiful":

A way of life

I used to get a multi-entry visa to Russia once a year, and that was it, besides the occasional trip out of the country for registration purposes.

Then things got more complicated, and I thought...now if I just had a residency permit, I wouldn't have to "worry" about visas again.

As I got closer to getting my residency permit, I looked forward to the days when I would be free from bureaucracy. And there is a sense of freedom, in a way. But as my documents were finalized, I noticed the line for the people who were there for their annual inspection, from which I will not be exempt. Now I had a different thought: this is my life.

Of course it isn't my life in the sense that it's my purpose. But it is something that will remain constant. I can see that now as I imagine how even the next year will go, with lots of bureaucratic processes to endure. But there is no other way to live.

God is not going to take away this burden, although He may give me favor with the officials, or see that a law or two will change. I think I just need to accept the way things are and get used to depending on Him.