I was trying to figure out why I had time for blogging while in Estonia, and I remembered that we didn't really know anyone there. Back in Russia, there is lots of visiting to catch up on.

1) We had another family over, who got married a month or two after us and had a baby about 6 weeks after us as well. Of course that gives us things to talk about, but to tell you the truth, I love spending time with people of all ages and life situations, so that wasn't really the main draw. We actually had an interesting conversation with them about church fellowship.

2) On Wednesdays we have our "small group" Bible study meet here. I guess it is sort of a "young adult" group, pretty large, but this time we had only 2 guests. Secretly I like when very few people come, not that I don't miss the others. My mother-in-law has come over a few times to help with David so I can catch a bit more of the discussion.

3) My in-laws come over about once a week and bring us meals and groceries. And of course we share a meal together and David gets some grandparent love.

4) Andrei hosted a planning meeting for a series of round-table discussions that will be starting at the end of the month. They are often literary but other ideas have been suggested, such as scientific or current events. The format features a presentation by an expert in the field and then discussion, with refreshments.

Wish I had more photos to illustrate. I do have plenty of the baby...what can I say, he's the most photogenic around here!
at November 23, 2012 2 comments:

What are you doing?

It’s time to think about Advent!

I would love to hear what you are doing this year. Of course I will share what we are doing, if we ever decide! J I think my favorite idea so far has been the Jesse Tree: a trip through the Bible (via selected readings) and God’s promises in one month, with a neat visual presentation.

Out of this category of ideas, the most eye-popping one I tried was the circular calendar. And then of course, there was the interesting tree I sculpted one year at my parents.’ One year I simply made a calendar with little paper pockets and left surprises for my roommate. That was fun, though not necessarily Christmas-related. We had a reading schedule for spiritual content.

Of course there are ways to observe this time of year that require less preparation: readings, candle-lighting, bringing out the figures of a nativity scene out one by one, opening the windows of a pre-made calendar…
I’m hoping we will at least find a good reading schedule. I like ones that don’t require you to scratch your head wondering how the verses relate to the Messiah.

Leave a comment and tell us what you’re doing! What materials are you using? Any visual aids? Is it a kid-friendly tradition?
at November 16, 2012 2 comments:

Email ThisBlogThis!Share to TwitterShare to FacebookShare to Pinterest
Labels: holidays 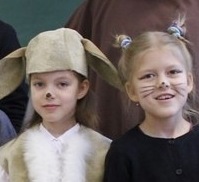 Maybe I've mentioned this before, but these two girls were born the fall I moved to Russia. Every once in a while I look at them and think, that's how much my life has changed.

While they were being transformed from infants into the savvy schoolgirls they are now, I did a lot of growing, too.

When they were babies, I was a college graduate in a strange land. The one on the left is Nastia; her family lived near one of the orphanages and I would visit them sometimes. My Russian was limited but the young mother would always pray with me. They had very little money, but she would always feed me and it was always delicious. Their family has become very dear to me and they recently had a baby in the spring, who shares my name.

These two were once the littlest pupils and we made a special Sunday school group for them. Now they are with the big kids.

They both got to be flower girls in various weddings. By the time I was getting married, Uliana (on the right) had a little sister. We asked Uliana to carry my train and Sasha to scatter flower petals.

By next year they will be even taller and wiser and prettier. And maybe I will start to measure milestones by how big David is. But I will always remember those girls and the early years.
at November 12, 2012 2 comments:

This year's bureaucracy season is coming to a close, though we will have to continue on in our quest of getting David and me the proper documents to stay here long-term.

The final pressing need was for me to pass inspection for my temporary residency permit. The whole family worked together to help me pass.

My father-in-law Vladimir walked my mother-in-law Nina to the metro as soon as it opened in the morning, so she could go get us on The List. The Immigration office hadn't opened yet, but lists were forming. Then she was the List-Keeper for the next few hours as the office opened and they began letting people in.

Andrei, David, and I got there about 30 minutes after it opened and it was already our turn! As we were getting close, I had this feeling that I was going to either pass out, throw up, burst into tears, or something similar. I half-hoped there would be a new inspector because I have so many negative associations with the usual one.


Andrei stayed with David and the stroller while Nina went into The Room with me. Same inspector as last year. She told me to get out my documents and began to look over my forms. A few questions came up, but I was able to answer them. She rolled her eyes at a few mistakes I'd made, and of course it was a huge no-no that I'd written the date a week before, when we'd planned to come but I'd gotten a sinus headache and David hadn't given us the chance to sleep very much the night before. We were sent out to redo that form and make a photocopy of a certain page of my passport.

It was much the same as last year, though it seems like they ask for copies of different documents each time, go figure. No unpleasant surprises this time!

So I passed inspection for this year and now I have less than one year left on my residency permit. It can't be renewed, so I should probably try to apply for permanent residency in the near future. We may meet with a lawyer first and get some advice. We also have to decide if we're going to go ahead and apply for Russian citizenship for David.

How did THAT happen? 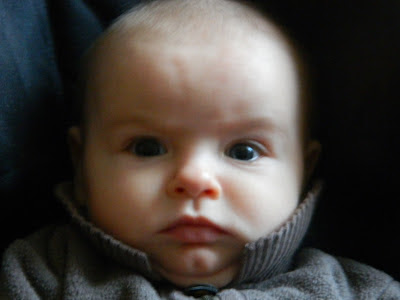