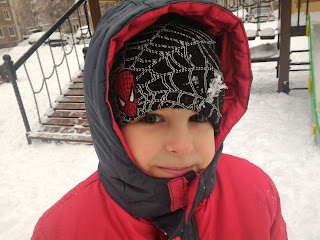 Andrei and I were having an intense discussion. I was crying. I think it was the second day of it, and when you live in an apartment, nothing gets past the kids (or neighbors-not that there was anything to be concerned about).

Before bedtime, I went into David's room to assess the situation since the kids had been playing in there. There were a bunch of books on the bed and I wondered why the kids had gotten into the books. It wasn't something David would normally do without asking to read with one of us.

Later, I was lying awake myself and made the connection. David had moved some books to get to the box of Christmas books that hadn't gone back into storage yet. He had uncovered the box, opened it up, and sought out that specific book. He wanted so much to make me happy that he went on a hunt for the best he could find.

David has interesting insight about God. We put the audio Bible on or watch Bible cartoons sometimes, but don't really have a daily routine. He considers himself an expert by now, so it's hard to go back to anything we've read already. I'm looking forward to him being a reader and discovering the Bible on his own. I started trying to do the New City Catechism with him, but he almost always answers in his own words instead of repeating back the answers in the Catechism. I'm not really sure what to do with that! For example, 1) What is our only hope in life and death? The kids' answer reads "That we are not our own but belong to God." David usually says, "That we're God's when we're alive and God's when we're dead." Kind of the same thing, right? I just find it interesting that he goes to the trouble to change the words around. And he does it with the other questions, too. I think that will be a good skill as he starts school. But there are probably times when exact wording is important too, right? Especially with Scripture? But there are so many different translations of the Bible, so that's confusing. I dread that day he learns about THAT.

Part of the reason I was upset the other day was that I had just spent some time thinking about a homeschool schedule (see previous post), but David had spent an hour screaming hysterically over getting dressed. And then Sophia had a meltdown when I was cooking lunch! How would we ever add MORE tasks to our schedule if we can't handle clothing and meals?

So there's always a mix of exasperating and sweet moments.


I will get back to hospital life soon- it takes some time to remember and organize my thoughts.

You guessed it, our schedule changed again and now we're starting over.

I might be repeating myself, but also have some fresh speculations about homeschool life. First of all, as you might have noticed, I've been dragging my feet about committing to a formal school day. And I'm also kind of reluctant to join a "community." There is so much information out there! There are lots of great blogs, and Instagram accounts. I look at Instagram posts (of homeschoolers) and see lots of comments asking of materials, "where'd you get that?" Obviously I don't ask the question myself because it wouldn't be sold in stores here or delivered to Russia. But there is still a moment when I think "I want that too...but I don't NEED it." The materials we have at our disposal are just right for us. But, it may take a little more creativity or perusing the Russian homeschool forums.

I'm attracted to the Charlotte Mason style of homeschooling and am currently trying to see if I can make it work with our family life. I like the whole concept of laying a "feast" before the children, presenting them with rich cultural treasures through a range of subjects, taking nature walks, etc.

Much of the approach revolves around "living books" (stories with real-life application) as opposed to textbooks. I took a look at our picture books, and they pretty much fit this description anyway, in a range of subjects-science, geography, history, etc.

But it's still a jump to go from just reading books together to turning it into school. I think it's going to take some work to make a transition into more formal schooling. My hope is that David and/or Sophia will get used to the format and then it will go more smoothly without having to explain each time what we are doing and why.

So, a few questions that have come up:


"But Mommy, an operation is better than dying," my 6 yr old likes to say. We have an open dialogue about death and the afterlife. However, there are a few topics I've avoided so far, such as childhood cancer. :( We've talked about how God knows the number of our days, and David prays for people not to die "before it's time." But I have a feeling that in his mind, the time to "go" is at least after you have grandchildren. And given all his phobias, I've been hesitant to bring up the topic of all the accidents that could happen (except in the case of his baby sister possibly choking).

A few minutes after I signed the consent form, a gurney came squeaking down the hallway and careened its way into our room, forcing the door open. I was told to take everything off and climb on.

While I was getting undressed, the orderly took the blanket from my bed and used it to line the gurney. I had to leave my glasses behind and everything. Maybe it was better to have my senses dulled a little. Besides, wearing contacts while being put under would irritate my eyes.

I got onto the gurney with the blanket folded over me, and they wheeled me out of the room as my roommates called goodbye. The orderlies yelled to each other about where I was going. We bumped down the hallway and around the corner and into an elevator, to go down a few floors to the operating room.

In the operating room, they brought the gurney up next to the operating table and I scooted myself over. They must have covered me with something for the preparation, but I don't remember. A few female medical personnel were asking me some questions. I didn't know if they were trying to determine my mental state or not...I remember something about my kids being bilingual. I had to sign a consent form and I couldn't see anything with my glasses off.

Since I had an IV port in already, that was where they could administer drugs. They did a little anesthesia test and asked if I was getting dizzy. "Not yet...oh yeah, there it goes." Then they put the mask away again. I think I was awake for a few minutes longer, but I don't remember much after that.