I had just decided it was too windy to take David outside, so I was getting ready to put him down for a nap at home. Then some rays of sunshine unexpectedly began peeking through. The next thing I knew, there was a rainbow. Not looking very snowy here these days!

So my computer broke! Yep, the fancy-schmancy one I just bought this summer.

No, I didn't get upset! It happened at the end of a difficult day/week, in the midst of watching Sesame Street on DVD, reading Christmas board books, playing with the electronic keyboard, coloring on the floor boards, and making a dent (so to speak) in the pile of dishes. Did I really care that I wouldn't be a slave to my computer that evening? Not really.

I do still have my old one! It's sluggish and needs to be reformatted. But it works and can access the Internet! I'd been having trouble installing my printer, saving documents, and using the touchpad on the new one. First World problems? Perhaps.

Anyway, I just wanted to write that I don't know if I'll be getting around to those posts. You know, the ones about how I haven't finished my Advent calendar yet and it's halfway over. Part of me wants to "rise" to the challenge of having a broken computer and try to publish posts every day anyway. Import my recent photos onto this computer, and such. But another way to take the higher road would be to take a little computer break and focus on some other things.

I don't know how this week will go. Sometimes when things go wrong I take the opportunity to see how my priorities and time management are doing. And there is definitely room for revising.

I hope everyone is having a great Advent season! 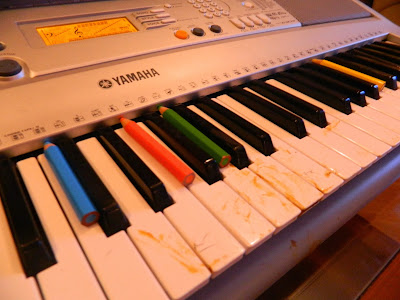 Just wanted to mention three people whose lives have inspired me lately.

1. C.S. Lewis-Last month we observed the 50th anniversary of his death (which coincided with the death of John F. Kennedy). Andrei and some of his colleagues at the St. Petersburg Christian University held a conference devoted to various Lewis-related topics. It was fun to hear from people that had studied his work and life so intently. And to be in an academic setting for a day. :)

2. Dietrich Bonhoeffer- I finally finished reading the biography by Eric Metaxas! It was a great read. And long, obviously. How long have I been talking about it? Since sometime last year? I recommend reading it, even if you've already read other biographies.


3. Fred Rogers-Looks kind of funny in this list, doesn't he? When I read Lewis I often have trouble convincing myself that he wrote in my native language! But Mister Rogers had a gift for explaining things simply. Can today's kids even relate to his slow pace? I put on a few clips (for David, but also for myself) and recalled my PBS childhood. And then I started to read about his life a little bit. One of the more interesting tidbits I found was this clip of him before the Senate! What a kind and talented person he was.
at December 06, 2013 No comments:

It's late here and I still want to work on Advent a little bit, so I will just quickly share something that I was thinking about the other day.

The holiday season tends to make us re-evaluate our relationships, especially with relatives. And we may feel fresh pain over those who are far away or no longer with us. When I let myself think about numbers (how many miles, time zones; number of times we have left to see each other in this world), it does get hard.

This week we lit the candle of Hope, and here are a few observations that give me hope:

1) I am not separated from my loved ones due to conflict.

Conflict creates a feeling of emptiness. When we fight with those we love; when we are estranged from them (even for a few hours) and our intimacy is threatened, it makes a hole in our hearts.

Physical separation creates a hole, too. But then I stop to think that I'm NOT in conflict with these people I miss. The distance does not make us love each other any less and we are not inferior to those families who see each other on a regular basis.

God places us in families, but He also scatters us. This calling should not ultimately be a source of grief, even if we have moments of grieving.


2) We will see each other in Heaven.

It is an amazing blessing when we have family members who believe in Christ. We can know that nothing will separate us OR our believing relatives from the love of Christ. They are safe in His hands.

Sometimes time feels short, and we never know how much time we have. But time works differently with God, and He has it all worked out perfectly.

As usual, Advent managed to sneak up on me even while I was working on getting ready! I have all these unfinished projects...oh well. I will share if they ever come together!

Last week was Thanksgiving in the U.S. and we had a new American friend named Emily over for dinner. Andrei cooked shaverma, which is about as far from a roast turkey as you can get (obviously we didn't cook it on a vertical spit, it was a stove-top version). I made apple crumble without crust. I'll put the recipe on my recipe blog soon but basically it's just baked apple slices with a crumb topping, nice and simple!

I can't do an update without mentioning the weather! As I wrote a few weeks ago, November was a very gray month. It was overcast almost every day. However, it shaped up nicely and the weather has been great recently: mostly clear/blue skies, beautiful pastel sunsets/sunrises, light snow, and temperatures just below freezing. David and I have resumed our daily walks.


At church this past Sunday we opened the Advent season. Andrei gave the first sermon, on Hope, while I attended Sunday school with David (see bottom photo). We have quite a large group of toddlers/ preschoolers!

That's all for now, but I've got lots of other things to write about, maybe tomorrow! I want to write a few book reviews, finish up the "church" series, and explore a few other topics.