Hosting World Cup 2018 and other news


Haven't had a chance to write in weeks, and the World Cup has been in progress for a few weeks already. It's so cool being a host city! I've never been to the Olympics or any other large-scale sports competitions, so this is kind of a new experience.


Although thousands of tourists hit St. Petersburg at this time of year, the demographic is totally different, of course. Instead of wealthy retirees or others simply on vacation, there are sports fans of all ages... not just from European/northern countries, but lots from the Middle East and Latin America, too. As you can imagine, that shakes up the cultural atmosphere just a little! It's so warm and friendly here. I love Russian culture, and have a cultural post coming up when I have the time. But all the people walking around smiling makes such a difference. Even the locals are admitting that despite the congestion and longer commute, the celebratory mood is contagious. It's hard not to smile when Brazilians and Egyptians are wandering around wrapped in their countries' flags. Hard to explain, but it's different from just the local soccer fans running around on a game night.

The city completed (or at least undertook) lots of various construction projects in preparation for this year's festivities. This year was also St. Petersburg's 315th anniversary. Public transportation is decked out in World Cup decor, there are banners everywhere, certain buildings have been restored, and two new metro stations have opened recently, with close proximity to the soccer stadium.

It's a great time of year to be in St. Petersburg: White Nights, soccer fans, and last Saturday was the annual "Scarlet Sails" celebration to honor high school graduates. Look it up to learn more! I've never attended, but various parts of downtown such as Palace Square are closed off to the public, and those with tickets get to attend a concert and gather on the bank of the Neva to see fireworks and the actual scarlet sails along the river. No alcohol is sold on that night...though I'm sure some people plan ahead!

Of course, there is always a downside to large events.

Summer always has a special feeling in the air. In St. Petersburg, of course, it stays light until close to midnight nowadays. 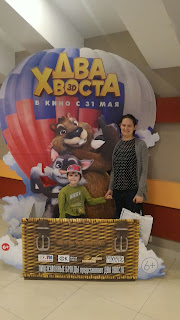 It was my first time in a movie theater since The Fire at Kemerovo a few months ago. I wouldn't really say I was nervous, just more aware. Probably the way Americans might have felt after the Aurora shooting. I looked around for emergency exits-no padlocks or other safety violations to be seen. Regular emergency exits that have the bar you press to get out.

Still, though. My MIL doesn't even want to set foot past the first floor in the shopping malls. We haven't said it out loud, but I don't think we would linger in any of the kids' (enclosed) play areas anymore.

I stood in the foyer of the movie theater and had to struggle not to cry thinking of the schoolchildren who perished. When we took our seats, I let my mind wander a little bit to the unthinkable. Not because I was scared for myself, but because I had to mourn for them a little bit and put myself in their parents' place.

Other than that, it was quite a nice time, just like a trip to the movies should be. It was probably my first time being at the movies with David (he usually goes with Andrei), and it's fun to experience the joy of it through a child's eyes. The movie theater and special snacks are still something special. I loved his little rules, like not sipping our milkshakes until the movie started (except for a little tiny bit just to try it).

Andrei and I both dozed off multiple times throughout the film and agreed it was probably the worst we'd "seen." But David was content and even said he'd love to see it again. :)