A look back at Soviet medicine 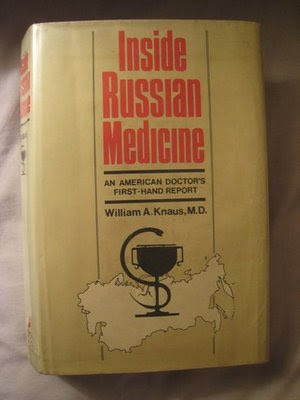 I figure a trip to the library is a success if at least one book (out of 5-6) is a good read. This time I enjoyed "Inside Russian Medicine: An American Doctor's First-Hand Report," by William A. Knaus, M.D. (New York: Everest House, 1981)

The book is an autobiographical account of an American doctor who is sent to Russia to accompany an envoy of Americans traveling with an exhibition. Since a delegate once died on the trip, they now must have a doctor with them at all times.

From the inside cover: "When a member of [Dr. Knaus'] group fell ill, he insisted on accompanying him to the hospital, and thus became one of the very few American doctors to work in a Russian hospital and operating room. Fascinated by the contradictions in Russian medicine that he found, Dr. Knaus made several return trips to study the Russian medical system."

The book is a treat because while Dr.Knaus is an expert in his field, the account is quite personal. While he is clearly competent, the average person can pick up the book and enjoy it without needing knowledge of medicine. I also admire the author's expertise in Russian language and culture. It's evident that he is having a lot of one-on-one talks with people, and this direct contact enables a wealth of fellowship. I can tell by his use of Russian terms that he knows Russian well. Instead of using an approximate English equivalent of terms which really are untranslatable, he simply describes the word in its context in Russian culture, and continues to use the Russian term throughout the book. I like that approach.

Here are just some of the interesting things I read about:


This book is not for the faint of heart. However, I'm squeamish, and I got through it, probably because the book is so fascinating.

I cannot judge the accuracy of Dr. Knaus' claims. However, the book is mostly a first-hand account. Unless he is lying, you can't argue with a first-hand account, although I don't know how representative his observations are of Soviet Russia as a whole. I also don't know what remnants there are of the Soviet system in Russian medicine today. My feeling is that certain traditions were introduced into the culture which were once observed out of necessity and now remain, despite modernization in other areas. Knaus expresses curiosity at times but is very respectful and non-judgmental towards the Soviet system. While reporting on negative phenomena such as abortion and alcoholism is unavoidable, Knaus also commends many aspects of Soviet society.

Another interesting feature of the book is towards the end when the tides are turned and a Soviet envoy of doctors visits Knaus in his workplace. And it's their turn to be surprised and ask questions.

The Russian doctors are amazed, for instance, at the care put forth to try to prolong the life of an old man who will probably not survive.

"Isn't it difficult to stop treatment once you've started?"
"Yes," I admitted, "It is very difficult, sometimes impossible."
"So how do you kтow, and why do you begin? This patient is eighty-one years old. He's had a good, long life; why add to his misery now?"
"But I am trying to save his life." The Soviet doctor shook his head slowly.
"That is the difference," he said, speaking softly at first. "That is the difference. In America you think medicine can do everything. In Russia we understand its limits." (pp.349-350)

In his concluding statements, Knaus makes a few generalizations about Soviet medicine. But they are very general.

"...past observors [sic] have referred to the Soviet medical care system as either an enormous success or a colossal failure. It truly is both. As a national program aimed at conserving scarce resources while providing basic services, it is a qualified success. From the perspective of a patient in need of special attention or individual emphasis it is frequently a failure." (pp.356-357)

I would love to read an account of the current Russian medical system. I know so little about it.
at January 08, 2009