I went to the orphanage this week. I hadn’t been there for a long time because I normally go only once a week and each week there was a scheduling conflict, like school vacation or sports tournaments.

It was good to be back, in some ways. And in other ways, it was upsetting.

As I approached Group #1, the little girls ran out to greet me and announced that a psychologist was there to work with them too. But the psychologist said she could wait, and sat in on our lesson to observe. She seemed like a student-type, so it must have been a research project.

We began our lesson, and I found that the girls had forgotten everything. Every.Thing. First we pulled out their English “passports” to go over the basic check-up questions. “What’s your name?” I asked the first girl. “Eleven!” she shouted energetically. Sigh.

We played with some flash cards, but then in doing the written assignment, it became evident that they don’t know the alphabet. Okay, they might recognize a few letters, but they certainly don’t know how to read. We’ve done plenty of tracing activities, so they’re familiar with how the letters look, but as far as connecting them with the correct sound(s), there is no progress. It’s too hard when we only meet once a week. So I’ll have to reevaluate. I’m not sure if it’s worth it to begin the alphabet from scratch in April. We’ll probably have to do just oral/pictorial activities until the end of the year. 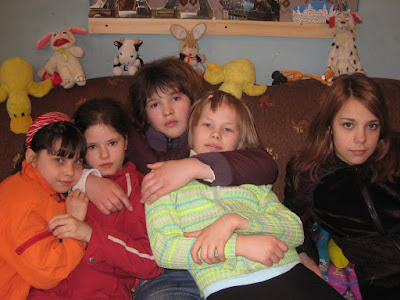 Next I went to group #2. Their memories were working a little better, but the behavior? Oh. My. I entered the room and Nadia was sitting in a chair zoning out with her cell phone. I said hello several times and there was no visible response at all. I went into the play room where we have English and got out my materials in a hurry since I had been stuck in traffic and was late. One boy, Misha, came over. “Can you call the others, please?” I asked. “No, and I’m not going to do English either,” he said with this silly smile on his face.

Eventually a few kids came in. One girl, Olya, was new. She seemed to have potential, so I made sure to give her attention during the lesson and give her a chance to participate along with everyone else. I was having difficulties with Roma, who I’m fairly certainly has been sexually abused. He has always had very strange behavior. When he was little it was just silly but now it’s depressing. He spits out swear words constantly and then immediately follows it up with “I love you.” He’s the first to disrupt the lesson yet he’s also the first to answer questions. Unfortunately Olya was encouraging his antics. I’m not sure if she was nervous or actually thought he was funny, but she kept giggling at everything he said. The other kids were discussing how much Russian I understood. I try to avoid speaking Russian during the lesson so that they will hear only English, but outside of class I speak Russian, and they know that. Still, it was a popular conversation topic. “She speaks Russian, she just doesn’t know swear words,” one boy said, at which point Olya giggled again. About 3 of them were playing with cell-phones, and I confiscated one. As I was getting ready to go, Roma came up to me, looked me straight in the eye, and called me a b----. Then he hugged me and told me not to leave.

After the orphanage, I went to sit for a 3-yr-old from church while her mom went to a meeting. It was fun because she’s at the age where she goes along with every scenario you can imagine, using whatever props are available. A plastic cup became a telephone, a few blocks were our grocery store, and the stuffed animals dropped in on each other to visit. We also set up a bowling alley and set up a train-set, all in the one-room apartment.

Later, her mom came home and we spent a few more hours visiting. Before I left, I decided to try speaking with Nastia in English while we were playing with the train-set one last time. In about ten minutes she had learned several words (bus, train, stop, go, yes, no, etc.) and was repeating after me of her own accord.

Now why is it that when I spend 3 hours preparing for a lesson, there are no results, while a few words inserted spontaneously into playtime get results? 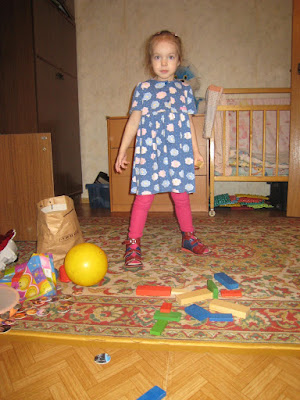