My mission in Moscow was 3-fold:

I arrived by train at 5:30 am. The fingerprinting was at 3 pm;  you do the math. I tried to sleep for a bit in the train station, but I found it freezing cold. So I sat down in a café with a cup of tea and tried to keep from nodding off. 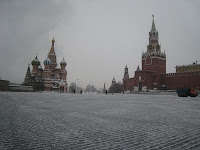 After a few hours, I headed into the metro and went to Red Square and made myself take my mittens off long enough to take a photo. At least there is material evidence that I was in Moscow. continue/-

It was cold and I was going to hang out inside somewhere, but the shopping centers all opened at 10. I was an hour early. I decided to see how long it would take to walk around the Kremlin. Meanwhile, I got distracted by a large church in the distance and wandered over to take a photo. But my camera battery had died.

I walked back toward Red Square…10 am on the nose. Hooray. Only 5 more hours to kill.

For the rest of the day I wandered around town and periodically entered cafes and shops to warm up and rest my feet. No, I didn’t visit any museums; I could barely remember my name at that point and was not feeling up to cultural excursions. I don’t make a very good tourist.

I was having trouble finding the street I would need later, and entered an information booth that I happened to notice as I was passing by.

After looking it up, she handed me a slip of paper where she had written down the name of the street and the highway that it intersected.

Well, I wanted more out of my 40 rubles. At least, more than I could have guessed myself from my map.

“Which way should I turn down the highway? Left or right?”

She looked at me strangely. “Not far. One or two minutes.”

Well, that was a waste of money.

I ended up looking for the street for about 20 minutes before I found it. And I did later find it on my map; the name was split up by intersecting roads.

When I entered the immigration center, the doorman told me to go to the second floor. The receptionist seemed concerned that I didn’t have an appointment (I had simply e-mailed), and I was worried for a moment that the technician would not be available. He was in his office, and seemed a little reluctant to help, but did a good job.

It was one of the few times I’ve wished I lived in Moscow. Such a trek for such a simple procedure.

After entering my personal stats, he took my fingers and rolled them over the electronic “inkpad.” He printed out two copies so I would have an extra. Well, I did pay about $35.

He also made sure I had the instructions from the FBI, and then looked up the UPS address on his computer and printed it out for me. Not bad work for someone not wanting to be bothered.

The office complex was about where Igor had said it would be, although I did have to consult my map.

It had been a long time since I had been inside such a huge complex. There was a metal detector at the entrance…I’ve noticed that Moscow is fond of them.

I held out the UPS address and pointed to it, in case they thought I was trying to sneak in or something.

“Blah blah blah 10th floor,” said the doorman. I picked a direction and started walking. There were conference suites, office wings, luxury gift shops, etc. I tried a few directions, but they all seemed to require an ID card. I sat down in a quiet area with a fountain and filled out my remaining paperwork. Then I found the reception area again and asked for directions, finally learning where the elevator was.

The UPS center was just a little office on the 10th floor. There were two guys, one of whom told me how to fill out the mailing slip. It only took a few minutes. Ahhh, so good to have it out of my hands!

Time to find the church. It was a bit early, but I didn’t have anything else to do. I followed my little map and found that the church was in a glass-paneled building. I realized that I couldn’t remember when I had last set foot in a Russian church that had its own facility. Of course some churches in St. P. have nicely renovated old apartments or movie theaters. But this was a fancy, stand-alone complex. I felt like I was in a different country. Everyone was milling about before the worship service, but no one was greeting visitors.

I asked the girl at Reception to connect me with my contact. Unfortunately, the contact hadn’t been able to stop by the church and the materials weren’t there. Oh well. Mission #3 was a bust.

Finally, time to go to the train station. I had a 9pm train-not the best for getting sleep, but at least I didn’t have to hang around in Moscow until midnight.

I found my bunk on the train, hoping that my neighbors would be merciful and let me retire early.

About 5 minutes later, I found myself being interviewed by 3 Russian businessmen consuming beer. AKA, my bunkmates. They were jolly folks from St. Petersburg, wanting to relax after a business trip to Moscow. We watched a few episodes of a comedy sketch show on someone's laptop, and then went to bed. I ignored their quips about snoring, undressing, etc.