Back to reality, part 2

I am facing a situation of too many variables. I keep waiting for there to be something constant. 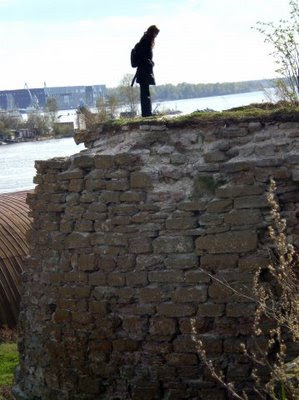 How I abandoned the first plan

I arrived in March on a 3-month visa. The plan was to look for a job immediately so I could get a work visa. But "looking" quickly turned into simply waiting for something to happen. It was a red-light situation that I faced after considering the fact that I could work for either a big-name company or something related to Americans and missionaries. For example, there was a missionary school that I could apply to, but I'm not sure if I want to live in Russia and teach Americans and other foreign children. That seems a bit ironic. I'm also not sure if I want to work for a big company. I would rather help some smaller organization to succeed, but unfortunately the smaller companies don't have the money for dealing with all the paperwork that it takes to hire foreigners.

I had a feeling the answer would come on its own. And in the meantime, there was a lot to squeeze into 3 months without worrying about things like jobs and housing.

How another idea started to form

At some point, residency status became more appealing than a work visa, for obvious reasons. I put the job search on hold because I didn't want to commit to a job and then have to interrupt it while taking care of paperwork.

According to the laws, I don't have "grounds" for getting residency status. No Russian spouse, children, personal property, etc. That means that I'm subject to the quota, which gets renewed after the New Year. It's doable, but it's something that requires a lot of time and energy.


How my summer plans developed

So now another question remained: What to do with the 6 months between my current visa and the end of the year?

This time, a student visa did seem to be the better option. I could sign up to take some classes June-December within an individualized plan. As a result of the course, I could take an official exam that would prove my Russian proficiency at a certain level.

Meanwhile, two of my sisters began planning for their weddings in July and September. I was facing the necessity of a visa trip somewhere in June, then two more trips before the end of the year. I could make the visa trip in Finland or Estonia, but a 3-month visa would not allow me to go in and out of Russia several times.

An idea arose: "Why don't you just go home?" and I didn't want to listen to it, but I decided to give it some thought. On the one hand, I want to be here as much as possible. Life "on the road" is not for me. At least, it's not what I would choose. However, the earth did not stand still the last time I was gone. Summer vacation is always a pretty disrupted time anyway. I would prefer to spend it all in one place, doing something productive.

So I began preparing myself for leaving again for a few months.


How confusion arose once again

In the midst of getting plane tickets and making summer plans, a Christian friend from Serbia (who lives here) called me unexpectedly.

"I have found the answer to your prayers," he said. "There is a company who will hire you and give you a work visa. Tell me your home phone number, and they will call you."

So I found myself talking to someone from this company. It sounded interesting, but I hadn't been looking for a job. And I was preparing to leave the country. It was all so confusing.

"Do you have certification?" the lady asked. "TESOL." "Great!" When I told her I was leaving in a few weeks, she said that they could find another position for me if this one got filled before my return.

So now I am back to thinking of the work option again. It would be nice to have the stability of a full-time job with visa support included. However, I wasn't really looking for a full-time job. I like teaching a few days a week, not every day. I stay quite busy. What about my other commitments? I am going to a conference this weekend on orphanage ministry. That seems like odd timing as well, since I am leaving. None of it makes any sense.

Also, I still want to take steps toward temporary residency. After all, a work visa is still something temporary. What happens if my position is terminated? I will have to start the search all over again.

Here is the summary for anyone who didn't follow that...

Short version:
-In the U.S. June-September
-In Russia September-December
-Possibly applying for temporary residency in January, while on a student or work visa