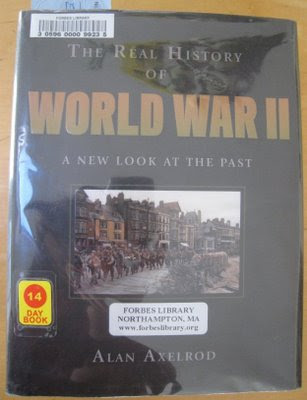 I'm not a history buff, but when I saw this book in the new book section at the library, its glossy illustrations enticed me.

And why not learn more about WW II?

I studied it a few times in school, but it is such a vast topic that there is still a lot I don't know, and that which I knew, I've forgotten...

I am going to be lazy and use the product description on Amazon as a starting point for discussion. Added emphasis and subsequent comments are mine.

"As with the series’ first entry, The Real History of World War II remains authoritative, non-academic, and appealingly designed with illustrations, maps, and more."

-"Non-academic"? If that's true I'd like to see what academic looks like. For me it was like a textbook with pictures. Perhaps this means that he wrote the book independently and not as part of a research project.

-the illustrations are great, but the maps didn't help me other than in providing more eye-candy. They look like scanned images. When I'm reading about a war, I have a hard time understanding the territorial issues without a visual aid. The maps in the book are poorly labeled, difficult to see, and limited in size. 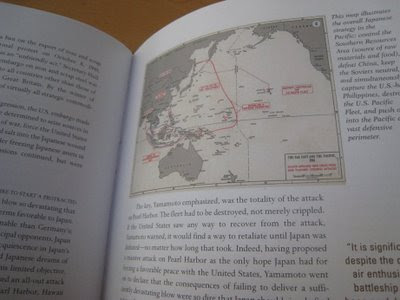 "Axelrod brings you right into every theater of the war, one by one, capturing all its most compelling events before moving on to the next."

-While I can't attest to accuracy, I was shocked by the number of individual battles in individual locations that were fought. I am sure that we did not cover all that in school. I admit to skipping a few of these sections, because it was just SO much information.

"If, today, we see World War II as a titanic clash of good and evil, Axelrod effortlessly looks beyond this schism, putting facts above political interpretation in order to uncover the conflict’s roots and ramifications. He concisely explores the war’s ideological, nationalistic, and economic causes; probes the motivation of those involved, including Hitler, Mussolini, Stalin, Churchill, FDR, and Truman; and looks at its enduring political, global, social, and technological legacy."

-Axelrod's objective attitude was one of the most appealing features of the book for me. I was always taught that there were essentially two sides to the war, split into alliances of 2-3 countries each. Now I've learned a little more about the intricacies of the international relations involved, and the fluidity of who was working with whom. I've absorbed into my brain a few more examples about both the good and evil in the motives of all parties. It is hard to call any country heroic, while being aware of the atrocities that were employed. However, that doesn't mean that soldiers fighting for a cause that they believed was right should be denied honor. It's a complicated matter, but I'm learning that there are many points of view to each historical event.

"The fresh insights and forthright analyses, the sidebars on such subjects as trivia and alternative histories, the eyewitness testimony and quotes, and the revealing, edgy attitude make this a pleasure to read like having an enjoyable conversation with a favorite teacher." 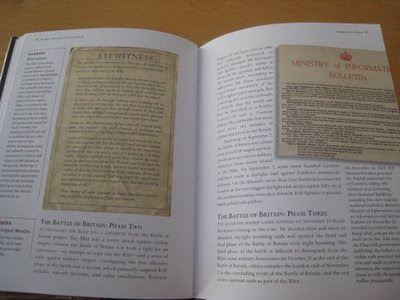 - I did find the sidebars entertaining, although it often presented a dilemma: keep reading the main plot or pause to read the sidebars?

-I was naturally focusing on information about the U.S.S.R., as well as the U.S.A. I was surprised that there wasn't more coverage of the Siege of Leningrad. It was featured in a few sidebars, but didn't get much mention in the overall account. The chapter on the Soviet front focused mainly on the battle itself and not on what the citizens were facing. It may have been the author's choice to keep it that way so that the continuity of the battle history would not be interrupted.
at February 17, 2009