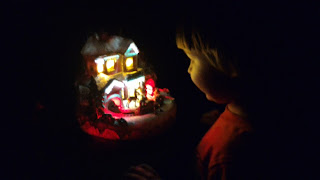 It actually wasn't too bad considering New Year's Eve is one of my least favorite holidays. I think I'm warming up to it, but it's still hard to accept that the Russian New Year is my Christmas. So a lot of the excitement that I feel for Christmas is what they feel before New Year's. Whereas I feel nothing before New Year's, so I feel guilty for feeling nothing! If that even makes sense. I also don't like messing with everybody's sleep schedule and then having to get back on track. That must be an adult thing as I enjoyed plenty of all-nighters in my youth!

So, my in-laws came over around our dinnertime which is 8pm. I barely lifted a finger this time. I try to get the table set and create a generally festive atmosphere, but I can't handle a bunch of cooking and cleaning with small kids around. So they actually brought the food AND the presents, and I was (mostly) cool, calm and collected...MY gift to everyone. Seriously, it was a good plan. I was hanging the laundry while they were there, though...sometimes Andrei and I sneak around trying to get things done while the grandparents are around!

We tried to get Sophia some sleep before the fireworks began, but she wasn't keen on missing the party. She definitely got a little over-stimulated.


David was excited about presents and cake, but the hit of the evening was a box of glowsticks that Nina had bought on a whim. We also spent time trying to decipher a game (Topsy Turtle) that was programmed in Finnish.

Is it midnight yet? We were all getting kind of sleepy! Eventually popped David in the bath with his glowsticks to wind down a bit. We sent Nina and Vladimir home around midnight so they could make it on public transportation before it stopped running. Only I hadn't looked at the clock, so it wasn't until about 20 minutes later that I realized we were in the New Year!

I lay down with David for another hour or two getting him to sleep. We couldn't resist pulling back the shade and watching some of the fireworks show! Andrei held Sonya for a while so she wouldn't be scared. Eventually I snuck away to brush my teeth, and it turned out David had already fallen asleep. But I stayed awake for a few more hours: too much noise outside, and too much chocolate in my system!

I love the quiet on the morning of New Year's Day when everyone is fiiiiinally partied out and sleeping in. We went on a family walk as the weather was really nice...plenty of small children out walking with their parents, apparently not deviating from their normal wake-up time!