You know the joke (sort of) about how new parents look down at their baby and wonder when the "real" parents will show up? Only because it is such a great responsibility!

Confession time: I STILL feel that way, even though my son just turned 4.5 years old. How is he MINE? How am I old enough to have kids? (and some of my friends have teenagers) When are the real grown-ups going to show up and make the decisions and take him to the doctor and shepherd his little heart? I'm so glad I don't have to do it by myself. Because I'm winging it. 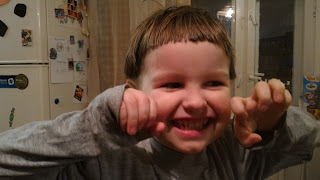 When I take the time to slow down, I wonder if I'm too late to enjoy him while he's still little. What if he doesn't need me anymore? I yell "I love you!" just to test it out, and he still says it back. :) I reach out for a cuddle, and he's still up for it. Whew. I can't carry him around anymore. And since I stopped trying to carry him around much about a year ago, it always surprises me when I put my arms around him and feel how tall and heavy he's gotten.

At night David often calls for me, since Daddy is with Sophia. I grab half the contents of my bedside table and relocate to his bed across the hall. Recently I noticed that he was making it until dawn by himself. But then I kept going in to join him anyway. Sometimes the neighbors were too loud on my side of the apartment, and sometimes I just wanted the company. I wanted to squeeze in as many cuddles as I could! Then when it got really cold this past week, we curled up together for warmth, and argued in the morning over who would turn on the light!

Having a younger sibling can make a child seem older, but David is still a little boy! He still has cute (mis)pronunciation and plenty of innocence left. "Come visit us sometime," say the guests on their way out. "Okay, I'll come tomorrow!" I'm a little bit scared thinking of the disappointments in life that will eventually come his way.

I hope he notices that I neglect the housework in order to spend time with him! I know it probably seems like he always has to wait for me to just do one more thing-feed the baby, go to the bathroom, get a drink of water, turn on the washing machine, etc. But I really do try to relax and be present, even if I complain about the mess all along the way.

P.S. Totally forgot to dedicate a song to my birthday boy! Not really related to motherhood, but in honor of the Storks movie we've been watching lately, it's "Fire and the Flood" by Vance Joy.