This was one weekday last week that I decided to document!

Andrei made breakfast for us and then we went into the living room to drink tea and coffee while David had a little playtime. Then A. went into his office to work while D. and I commenced "getting ready to go outside" which is a process that takes about an hour...in the winter, at least. There are lots of interruptions and D. is pretty resistant. He's starting to understand the connection between going outside and the need to get dressed, but he just can't handle being in his coat for longer than 30 seconds while we're still inside.

It was a delightful sunny/muddy day with no agenda...except perhaps a photo or two for my blog. I didn't even really care if we got dirty. David is into rocks now and we got a dumptruck full of them and then spent our walk trying to make sure they didn't fall out when we went over bumps. There was puddle-stomping too, and D. eventually fell down and I decided it was time to head for home just in case he had a suddenly meltdown and needed to be carried. When we got pretty close to home, I got him ready for the transition and had him point out our building to be sure we were on the same page about where we were going. 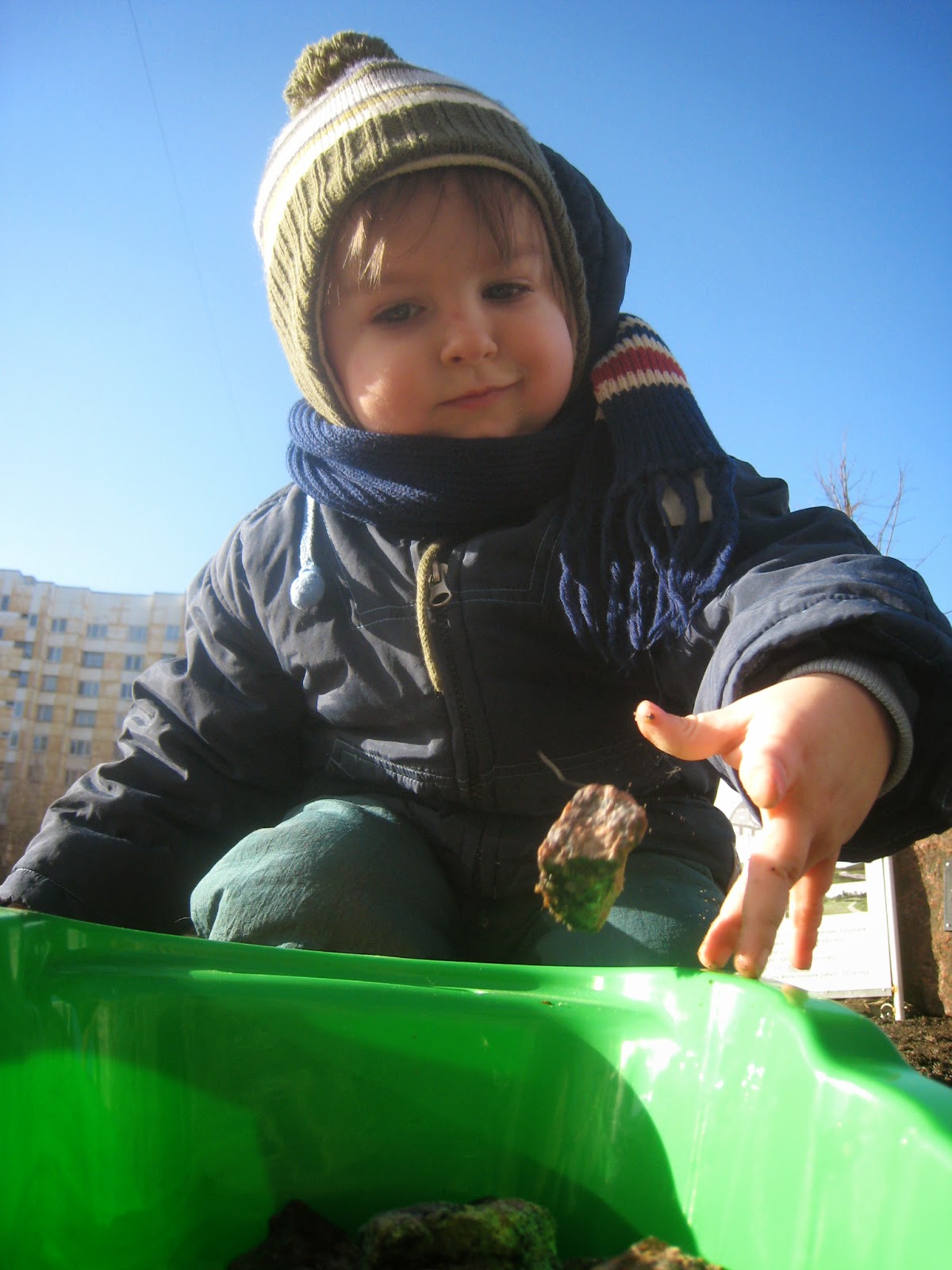 That was before the nice day got weird.

Just then I looked over my shoulder and saw a man coming up behind another guy with this vengeful look on his face. There was a tussle and then one was on the ground while the pursuant ran away. I grabbed D. to get us out of there, but he freaked out about being moved forcibly, and I couldn't manage him plus the dump truck full of rocks. Meanwhile, I wondered if the guy needed medical attention. No one walking by seemed to care so I guess he didn't look that needy? I called A. on my cell phone (in retrospect he could have probably just looked out the window) and tried to explain, but the man got up at that point and walked drunkenly away. I guess he was okay! Andrei came downstairs to meet us and coax David the remaining 50 meters to our door.

Once inside, we washed hands and got clothes soaking, and then for a quiet activity I gave David some containers of water for dunking his rocks. I gave him some lunch and he was getting drowsy at the table, so we went off to start the nap routine.

We sat in D's room having quiet time and trying for a nap for about 2 hours! I would have gone crazy except that it's become my computer/blogging time. Even if he's not asleep yet, I can jot something down. After 2 hours I didn't know what to do, because he was still cranky but wouldn't go to sleep. So A. put him in the stroller and rocked him to sleep.

A. was heading out to the store for potatoes and I realized I was actually alone, so I sat down with my bowl of soup and started watching one of MY Netflix shows. In the middle of that though, A. showed up with his parents who were coming for dinner, and I hadn't even washed the dishes or anything, oops.

Nina and I went to try to trim D's bangs while he was still asleep in the stroller in the porch, but at that point he woke up and joined the party. The Haircut would have to wait.

After a tasty dinner, we tried again for a haircut, but there was no hot water! So much for those plans. The alternate entertainment consisted of Nina and David lumbering around climbing in and out of David's IKEA play tents, while Vladimir, Andrei, and I talked around them.

Then we distracted David with Clifford so the in-laws could get out the door. Since the hot water was back, he got a long bath, too.

For some reason, I still didn't do the dishes though, and the water was gone again the next morning! Oh well.

This post is brought to you by a 90% asleep toddler...