My first impressions of Kinshasa were similar to my first impressions of Russia in 1996. I felt at a similar level of cluelessness regarding language, history, and culture. In an “ignorance is bliss,” sort of way, I had nothing to lose-yet I also had no way in which I could be particularly helpful. 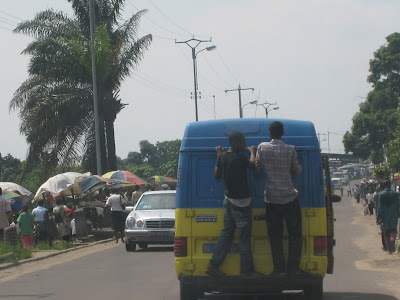 Simple factors like different hours of daylight, hearing a European language being spoken in Africa, and being one of few white people around were pretty disorienting. The trip was short enough that there wasn’t enough time to absorb the local ways in order to “do as in Rome.” Beyond basic greetings and reading some road signs in French, I couldn’t do anything on my own and was dependent on my brother and the mercy of English-speaking locals to help me out.

I compared Kinshasa both to St.Petersburg and to my hometown in the U.S. Some of the aspects that were surprising to other Americans didn’t affect me as much: the noise and air pollution, the crazy driving, the military presence. Many of the stores were small and run-down and reminded me of ones you would find in a village in Russia, or a few years ago in St. Petersburg. However, I found products in the grocery store like cake mix and other Western imports, which are harder to find in St. Petersburg. As in Russia, the imports give an appearance of affluence, but the prices on them are too high for the average person to indulge on a regular basis.

My sister and I were going to be bridesmaids in the church ceremony, so we were picked up our first morning to get measured to have dresses made. We bumped along into town, and finally got out of the car. There were people selling things everywhere: inside stores, in front of stores, along the streets, at your car window…As we walked to the building, a lady called out to me. Thinking she was selling something, I ignored her as I would in Russia. After all, why pay attention if you’re not planning to buy anything? Then Hortense realized what the woman was saying, and when I looked back, my sweater had fallen on the ground and they were just letting me know. After that, I looked at people differently. In Russia people don’t generally like to interact with strangers, but in Kinshasa it’s okay to say “Hello,” or “Have a nice day,” or if someone is selling something, you can say “No thanks, I’m not interested.” 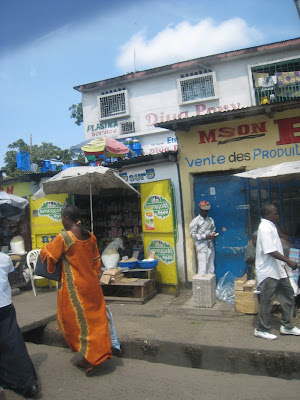 We were led up to a rooftop where the seamstress had set up a mattress and a sewing machine where she could work. Then she began to take our measurements. Everyone in the neighboring shops could see, and began to shout out commentaries. She was special because she had American clients, and the others wanted a visit as well. When Hortense handed over some money for the dresses, they shouted their opinion about that too. So there I was in Africa, standing on a rooftop and getting measured for the whole world to see. As an introvert, I ignored the attention and thought about how I would describe it in writing later.

That day, we also met Hortense’s family. The road to her house is unpaved and full of ditches, but inside they have quite a pleasant home, which they have been remodeling gradually over several years. We were shown into the sitting room and introduced to her parents. Her father, Hubert, gave a speech about us being “one family now.” He kept reiterating what an honor it was that we had come. The mother and younger brother quietly got us drinks.

As we were waiting for the rest of the family to get there, I asked Hubert how many children he had. He told me about his daughter and three younger sons and also about the older son who had died a few years earlier. Their first-born was older than Hortense and had created beautiful works of art, some of which were hanging on the wall, which Hubert showed to us.

When everyone got there, we sat at the table to have tea and snacks. It was obvious that we were all nervous about table manners. I tried to wait and see how the Mpunga’s used their silverware so that I could do it correctly, but they seemed to have the same idea, waiting for us. I also didn’t know if I should eat a lot to please the hostess or if that was considered greedy. I settled on eating the foods that were closest to me, so I wouldn’t have to make a request across the table.

The Mpunga’s were our first exposure to all the cheek-kissing(x3) and other customs, such as the men bumping each other’s foreheads and the sort of lingering handshake that confuses an American who tries to pull his/her hand away immediately.

When we left, we all said “See you tomorrow” in various languages. The next day was to be the cultural wedding ceremony.

That evening, we ate dinner at my brother’s. In a shed outside, the goats for the bride-price were being kept in preparation for the big day. And we were ready for the big moment, too.

Email ThisBlogThis!Share to TwitterShare to FacebookShare to Pinterest
Labels: Africa