I’ve been discovering how much I dislike non-religious holidays. I love Christmas and Easter, and I like Thanksgiving because I can at least direct my thanks to God. I dislike New Year’s. I can tolerate Valentine’s Day because it holds some fun traditions and it’s a good opportunity to show people that you care. When you live in your native country, you at least have the nostalgia and feelings of ritual to associate with the holidays. But when the holiday is new and you don’t have special traditions, it can seem meaningless, and celebrating can seem like a stressful obligation.

Last week a Russian holiday was observed. Officially it’s the day honoring defenders of the Motherland, a tribute to men who have served/are serving in the army. Unofficially, it’s “Men’s Day.” Being consistent with my dislike of ambiguous holidays, I was feeling irritated, for a few different reasons: 1) I wasn’t sure how recognizing men who have served in the Russian military is related to my faith. 2) I didn’t know how to “celebrate.” 3) The wretched, horrible drinking that went on.

I didn’t witness the drinking myself, I only witnessed the aftermath. Riding in the metro early on Sunday morning, I began to notice the youth making their way home after a long night. On any other weekend, it might have seemed “normal.” But it seemed tragic that a holiday honoring the courage and strength of men would reduce them to a state of being weak and hung-over.

I was almost at church and passed two men, one drunk, the other propping him up. Trying to redirect my thoughts, I reminded myself that I was going to a meeting where there are Russian men who love the Lord. I arrived and was filled with peace as men led worship, helped care for the children, imparted knowledge through the Word, and in other ways served the rest of us.

It is the Lord who has the strength to defend Russia from the powers of darkness, but He equips those He calls, and uses them to carry out His will on earth. And Russian men are a part of that calling. I'm thankful for that. 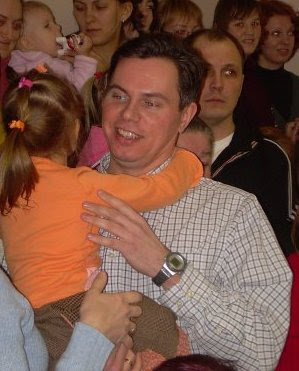