In our New Family program we have a few families who have been moving forward in their commitment to specific children.

Alina was one of our first participants and was quite committed from the start. It didn’t stop her that she’s 25, single, and shares an apartment with another family. Alina's faith is a great example. And it has confirmed part of the vision of this program-to help people who already have this calling to help orphans, but need someone to walk them through the process.

During our early group activities, Alina noticed two siblings, the younger of three total. As she attended our meetings and began to complete paperwork, she always had them on her heart.

Nastia, Danya, and Nikita’s mother suffers from schizophrenia. She visits them, but can’t care for them. She knows this and is contemplating giving up her parental rights permanently so that they can be adopted.

After taking the younger kids out individually for special outings, Alina then moved to involving all three. She has admitted that it’s a little more challenging with the oldest boy since she doesn’t know him that well, but he likes being included from time to time. They all go out somewhere together or visit Alina’s home and cook a meal.

In the future, Alina may be in a position to become an anchor parent for the kids. Through the “anchor family” concept, she would in essence “adopt” them, claiming ownership and becoming a permanent connection. They would have assurance that she will never abandon them. But because legal or practical concerns might prevent them from being adopted officially and living with her full-time, they would continue to live in the orphanage or somewhere else, and visit her whenever circumstances would allow. They would have a home. 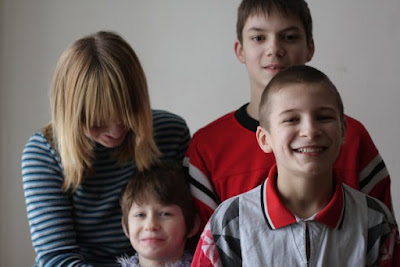