Of tea parties and pickpockets


For the past few weeks, my Canadian friend Sabrina had been talking about having a picnic. She had found a good spot and Andrei was going to visit the doctor nearby, so it started to look like it might work out to travel there together. Then the weather got a little windy and Andrei was leaving earlier anyway, so I decided to attempt a field trip to Sabrina's flat with David instead. 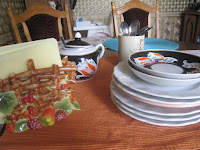 Of course it's hard to schedule anything since D's sleep schedule varies. On that particular day, he woke up an hour earlier than usual....which meant we really needed to get out of the house sooner in order to fit in a visit before naptime. Thankfully, that was okay with Sabrina.

It wasn't too hard to get David ready since he was so excited once I told him we were going out for a visit. Andrei had already left, so David and I rode the tram by ourselves, and then headed over to the metro. David was intrigued by the people who stand around handing out advertisements. He figured he should utilize this service. He went right up to a woman with a megaphone advertising a driving school, and was just so tickled that she gave him a flyer! He took care of his flyers very well.

As soon as we were in the metro, I texted both Andrei and Sabrina to let them know we were on our way.

It wasn't a very crowded time to ride the metro, and David sat calmly in his seat for the whole ride while I stood right in front of him. When we were passing through the center of town, I looked at the time to see how long the journey took. Then I put my phone back in my pocket.

And thought: I wonder who just watched me put my phone back in my pocket.

Which is funny, because I ALWAYS keep my phone in my pocket. In the winter I usually have buttoned or zippered pockets, or at the very least I keep my hand in my pocket, curled around my phone. When entering a crowd, I hold everything close. I have never, ever been robbed.

But I also felt a little bit on display because of having a small child.

When we got on the escalator to leave the metro, I put my hand in my pocket. My house keys and my cash were there, but my phone was gone.

I was so glad I wrote those last two texts, so at least someone knew where we were! Having a cell phone in St. Petersburg isn't an accessory or form of entertainment. It is pretty much essential to meeting up with anyone. I don't know how people managed before. Plans are delayed or cancelled all the time, people get lost, or two people can be standing a few feet away and still miss each other. Different metro entrances can be blocks away from each other. When we meet up with someone, we almost always say "I'll text you when I'm on my way," or "I'll call you when I get on the tram." When people come to visit us, they usually call a few minutes before they arrive to confirm our apartment number.

So I definitely felt a little vulnerable to be "unplugged" on one of my first solo trips with a young child. Plus, I didn't know what point Andrei was in his journey at that point.

Once at Sabrina's, I managed to recall Andrei's phone number and reached him to say what had happened.

Meanwhile, David was having a great time! He loves Sabrina and was excited to be in a new place with new baubles to marvel at, especially Sabrina's elephant collection. There were some cookies on the coffee table that he found right away and tasted, little rascal!

We had a nice visit and then decided to get going so David could be home for a nap. But his idea was to sleep in Sabrina's bed with HER, so we had to talk him out of that.

Sabrina walked us to the metro and David started falling asleep shortly after we had taken our seats. But he did NOT want to lean on me or be held. So he was a true head-nodder that day! Then I held him on the escalator and Andrei was waiting at the top.

Right outside the metro is a cell phone service center, so I got my number reinstated. There was a lot of information on my actual phone that was lost, but I've had my number for over 10 years now and I'm glad to hold onto it. I do need to buy a new phone though.

When we were discussing the theft at Bible study, everyone immediately said "of course, a mother and child" would be obvious targets. But I guess I wouldn't have thought of that. I would have thought there was sort of an unspoken code not to prey on women and children. What about the elderly or infirm? I would have thought trendy young men or wealthy gentlemen would be targeted more. After one of my first trips with David, I have now learned otherwise.