On Sunday I visited our new church location for the first time. The funny thing is that there are only so many Protestant church buildings in the city, and along with the Orthodox ones, they were given some other purpose during Communism (I'll get to that later). Now that the church properties belong to the Church again, we attend a range of events in these few buildings. We got married in one, attended weddings in another, went to a concert in the one further down the street...

The meeting hall we're renting now is the one with the gymnasium floor, up at the top of the stairs, where we once sat to hear a poetry recital, as well as attended a Santa Lucia celebration. That's how I remember it, anyway.  And now I'll spend my Sundays there. 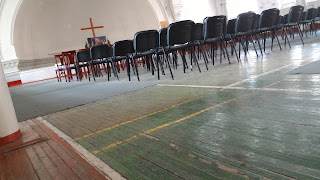 Since so many congregations share the space, no one's really taken ownership...not completely, anyway. I don't know all the details and I'm sure that efforts have been made to fix it up at least a little. But it's pretty run-down. Our conversations have been abuzz with discussion about which repair job is most important. Many wanted to focus on the floor, but the floor doesn't bother me. If you went to my church growing up, you know that the sanctuary always doubled as a gymnasium. Ugly, but familiar! So it made me feel right at home. BUT...I keep needing to be reminded that the gym floor in this case is a symbol of oppression and persecution; of a time when churches (in an architectural sense) were not used for worship. I can understand the need to wipe out that memory...to diminish its power, maybe? But at the same time, why not leave it there so that we can cherish freedom all the more? I'm not going to get involved, though. ;)

I was a bit nervous to be worshiping at the new facility for the first time, and especially to be singing up front. The acoustics are so different! And since it's summer, there aren't too many people in town. It always creates this interesting atmosphere, like we're going back to the beginning when the church was a small gathering.

The floorboards under my feet squeaked all during worship, but hopefully no one noticed. David spent the service outside with Nina. I went up for a birthday blessing. Afterwards, we headed back to the metro via Nevskii Prospect. On my way there, I had seen a film crew shooting some scenes. Now they were packing up. Some buskers were putting on a little concert and the sun was shining on the Kazan Cathedral. We posed by a statute of Gogol. If not for having a toddler (and my phone stolen the week prior), I probably would have found it relaxing. And hopefully we will fall into a nice routine. But just the thought of him darting away made my heart race. 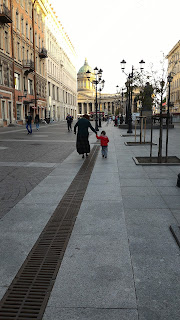 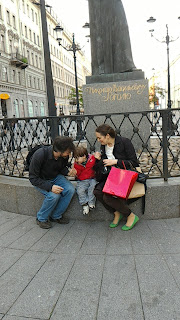