One day recently I decided to take David for a walk while Andrei was cooking dinner. It was actually after 7pm, but pretty much felt like afternoon, with there still being plenty of daylight.

David led me to a playground that had just been rebuilt, featuring a pirate ship, train, and other various climbing structures. He was ecstatic, and enjoyed looking through the "portholes" of the ship as I pretended to be a fish on the other side.

Then I looked up and saw black smoke billowing out of one of the windows on the first floor of the building that overlooked the playground. I couldn't see or hear anything coming from inside; no one seemed to be trying to put it out. Somebody's home was on fire. Several neighbors were on their porch balconies, but no one seemed alarmed. Diagonally to the apartment on fire, a man and woman stood on their second-floor porch, hanging over the railing, smoking. It was as calm a summer evening as ever had been.

I exchanged looks with a few other adults on the playground...was this really happening?

Then I looked to my left and saw two fire engines approaching, just as casually...no siren or anything. They silently drove right over and up and onto the edge of the playground, parking right next to the pirate ship play structure. The neighbors kept hanging over their porch railings, and the kids kept playing. I was sort of in shock. I guess I would have expected them to evacuate the building, or something. But I didn't see anyone coming out. 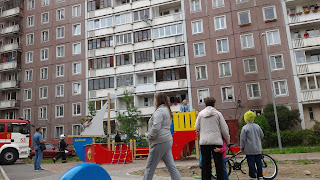 As we all stood there gawking and corralling our children, the firemen climbed off the truck and the air was filled with the sound of axes shattering windows. The hose came out.

Several minutes passed before I realized we weren't getting the whole picture. Of course...we were actually looking at the back of the building, the entrances being around the corner in the other courtyard. I managed to get David to come with me "for a minute" to see if anyone had indeed made it out. My heart sank as we came around the corner and I saw an ambulance parked outside. But maybe it was a good sign that it wasn't rushing away.

I'd seen enough. I grabbed David to say a short prayer before we walked away. He could not be dragged away from the playground, so we stayed awhile longer. I glanced up at The Window and saw a disheveled-looking older man stumble into the charred remains of whatever room it was, pour a beverage, and take a sip. Evidently he hadn't been convinced to go to the hospital. Or...what if he had just lost someone?*

We played some more, and then went home.

*A local news station reported that there had been one person injured, but none perished.