What a difference a day makes

In this episode: Fun with FedEx

I suppose it will be “fun” one day when my grandchildren ask, “Tell us about the time when a volcano almost stopped you from getting Russian residency.”

At least, that’s what I had been telling myself all this week.

My father received my FBI results just before leaving on vacation, and sent it to my brother in DC, who was able to get the apostille and immediately ship it out via FedEx.

That was last Wednesday.

With the help of the package tracker, I was able to see that by Friday the document was already in Frankfurt, and I would have no problem getting it by Monday  or Tuesday, with plenty of time to get the translation and make my appointment on Friday...continue/-

I have to admit, I wasn’t initially concerned about the volcano in Iceland or even about closed airspace. My loved ones were all where they needed to be, and no one was planning to travel through Europe. This is not to say that I felt no sympathy for anyone affected, nor concern for the mess it would cause, but it wasn’t high on my list of Things to Worry Pray About.

But then the name “Frankfurt” rang a bell and I suddenly realized that the situation was of importance to me after all.

My FBI results were in Frankfurt. They needed to get here by plane. No planes were flying.

And so, the vigil began. I alternated between checking the news incessantly and trying to stay away and think of other things.

The “status” of my document changed to “delay beyond our control,” and a few days passed before there were more updates.

T-2 days: By Wednesday there was still no news.
T-1 day: Today I was going to avoid checking the status, but my mother had asked in an email, so I entered the tracking code one more time on the website…

News:  “In Transit.” The location had now been changed to “Sankt Peterburg.” Was it really possible?

I made my roommate call the office because I was too nervous. They said it would be delivered by 3pm, so I canceled my plans for the day and prepared to stay by the door. They had also said it would need my signature. It’s a good thing we inquired, since I had planned to have Zhenya sign for the package if she was going to be home.

“Leave a phone number next time so we can get in touch with you,” he said as I signed for my documents. So anti-climactic! 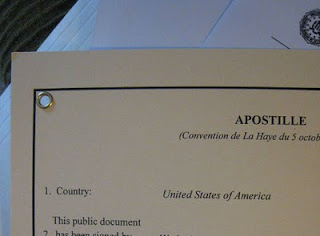 Email ThisBlogThis!Share to TwitterShare to FacebookShare to Pinterest
Labels: residency