Back to the orphanage

It was snowy and freezing this weekend, but I did catch a glimpse of some buds. Spring is here, somewhere.

My father and I took the train to the orphanage on Saturday...the orphanage that I was exasperated with just a few days ago. He couldn't go with me on Wednesday, so we made a special trip. 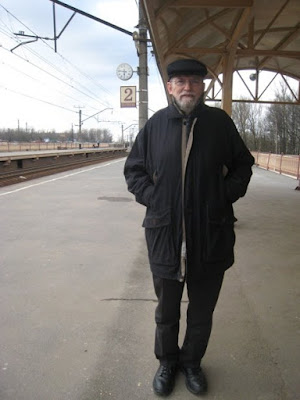 I had never been on a Saturday. It was a little more relaxed with no school the next day, although the kids are preparing for some exams next week.

My dad has been to this orphanage many times, but enough years have passed that there isn't much overlap, and the youngest kids he might have met are now graduating.

I took him to the group where I have English lessons most often. This is the group where I was robbed. Since it was a different day of the week, the counselor that was working was not the one from Wednesday, but the one that I saw weekly in the fall. She started explaining what the different kids were up to, and I said that we were just there to visit, not necessarily to have a lesson.

The kids started pulling on my arm and asking when we were going to have a lesson. Yeah, right! As if they wanted to sit down and study. My dad had some family photos, and that broke the ice and helped put everything into context. The counselor and the kids haven't been there long enough to remember Nastia and Masha, but we shared about them.

The counselor instructed the kids to give us a tour. In the hallway, we ran into a counselor who knew Nastia and Masha. She looked right past us and said "Look who's here!," greeting someone else who had arrived. She made no indication that she knew us. I used to hold English lessons with her boys, and they once told me that she told them I was trying to proselytize in the orphanage. I suppose she is very protective of them. But it's a strange feeling to be given a cold shoulder when you think you're friends with someone.

We tried to peek into the girls' bedroom, but they squealed and shut the door to do a quick clean-up. Then they let us in and got out their albums to show us. As we sat on the bed, I caught one of the girls opening the purse and I quickly took it and put it out of reach. I may have found my culprit. I hadn't wanted to go to the counselor when I didn't have any evidence, but I was praying for whoever it was to repent. I didn't say anything at the moment, but maybe I will question the girl next time.

A young singing instructor came in to meet us. She is a student in St. Petersburg. After we talked for a few minutes, she offered to share some bananas and cola that her parents had brought. This was a blessing since neither of us had had lunch.

As we all sat around the table, the counselor asked us many questions about Nastia and Masha and our experience with adoption. She wanted to know if they had learned English quickly or been homesick. It was a bit of a loaded question, as the Russian orphanage workers are often afraid that their kids will forget the Motherland. We explained that the kids assimilate well, but still have vivid memories of their childhood in Russia. Of course, it partly depends on the age.

On our way out, the singing instructor had the girls sing for us a little. Many of the kids were being difficult and refusing to take part. "It's so hard to keep them under control!" the instructor sighed. So it's not just me!

Even though there was still some awkwardness, such as the cold reception of that one counselor, I felt encouraged about visiting the orphanage. I plan to go there again in a few days.
at April 20, 2009