They say that Americans are obsessed with physical safety. I hadn't really thought about it before. I rather like our laws about safety(seatbelts, helmets, etc). It seems like common sense to me. But maybe that just proves the stereotypes to be true.

At any rate, here is a classic Russian example. The handpainted notice indicates that you can obtain the key to the basement by calling the listed telephone number. The door to the basement is padlocked. This raises all sorts of questions. Why is the basement locked? What is down there? What happens if there is an emergency? Whose number is listed, and is it possible to actually reach them? Yes, the great "key hunt" is a part of everyday life in Russia. Maybe it makes sense to them... 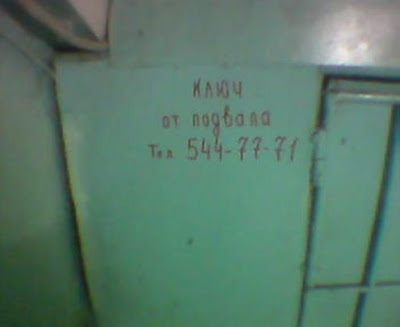 And here we have people playing with fire right near a crosswalk. The building burned down and the demolition guys decided to make some sparks fly with whatever that tool is called. Point, being, fire near people=dangerous. Or not? They did put a rope around the building...which doesn't exactly exceed the radius of the sparks shooting out. I don't think I've ever seen a "danger: hardhat area" sign in Russia. But maybe I'm just paranoid? 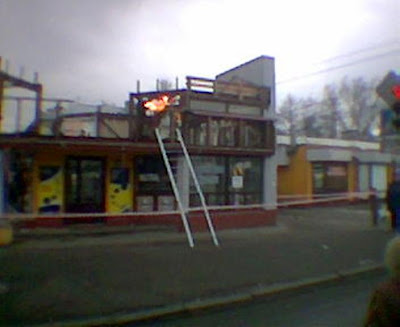 I do think I've gotten better at ignoring such differences. When I'm riding the public transportation, I just hang on tight and pray. What else can you do?
at December 01, 2007