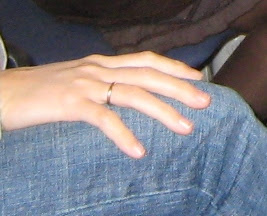 Sorry, this post has nothing to do with my marital status. I just wanted to comment on an observation I made recently in the metro.

I was riding home at the end of the day, and a young couple got on. I thought “oh, great, now I’ll be subjected to another sickening public display of affection.” Then I caught a glimpse of the girl’s hand and saw a ring. She’s married! I looked at the guy’s hand. He’s married too! They’re married to each other! It was a pleasant discovery.

In Russia I notice a lot of couples engaged in what I consider inappropriate displays of affection, but I don’t think there’s anything cultural about it; I think rather it is related to the fact that I ride the public transportation a lot. Riding the escalator in the metro an average of 4 times a day, I get an eyeful of that kind of behavior. And I think to myself, “How can he be treating her that way? She doesn’t belong to him; she’s not his wife.” Of course I am making assumptions that the couple is not married, but many of them seem too young. I also think sometimes it is obvious when there is a serious commitment and when there is simply…lust. But I won’t go into detail.

So whenever I catch a glimpse of wedding rings, I take it as a sign of hope. Maybe the vows were said in haste; maybe it won’t last…but they’re one step closer to a serious commitment. There’s a legal commitment. Their children will be born in wedlock. They’ve made a covenant before each other and before others. There’s something to fight for. I find that encouraging.
at October 11, 2007