I decided to teach the 3rd graders cursive. I thought they could handle it, and I didn't want them to be deprived, even though I'm pretty bad at writing in cursive myself.

In Week 1, the kids got tired after tracing the entire alphabet in cursive, so I let them stop at M in their notebooks.

In Exhibit A below, Katya managed to skip 4 letters between F and K, which I then added for her.
In Week 2, the kids claimed that it would be too difficult to write 13 more letters in cursive. So I let them do three more, N, O, P.

Katya spent most of the lesson crawing around under the table, but first made a fairly decent N, O, P.

Lolita did fairly well in Week 1. In Week 2, she wrote N, but then got confused and looked at the wrong line, writing K. After I directed her to the correct line, she wrote O and P in reverse order.

Galya also did well in Week 1. In Week 2, she made a beautiful N and then got tired.

Misha gets an A for effort. Unfortunately, he was absent for Week 2 and went to Karate class instead. 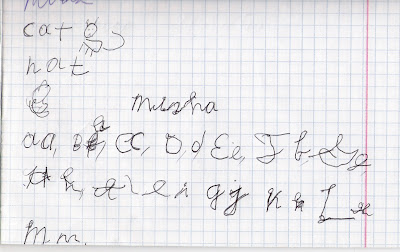 So I 'm thinking about abandoning the cursive idea, but I'm not sure. In Russian class we learned cursive right away. But is it really needed in English? Only if you're going to be writing letters. Obviously for native speakers it's important, but should I enforce it in ESL? The kids are getting by okay with the print. On the other hand, maybe it will be difficult for them if it becomes necessary to learn cursive later and they're only familiar with print.
Sigh.
at October 31, 2007