A study in metamorphosis

Misha was different at the beginning of the school year. He hugged and kissed me. He repeated everything I said in English, whether it was a part of the lesson or not. He dressed up in his Superman costume, especially for me. When I was getting ready to go, he would put on my coat and hat and run around while I chased him. 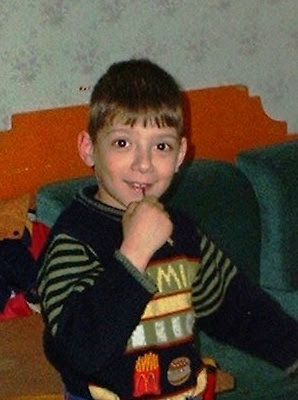 The farewell to the school year went a little differently. For the last few weeks, he had not come to class. He cried when pressured. Sometimes he came into the room and would watch with a scowl. Just before I left, he would beg for candy.

This time, he was slumped in a chair watching tv. He wouldn’t respond to my questions. For a few seconds his eyes became bright long enough to say, “Give me a piece of gum!” I was dismayed. “Misha, why don’t you want to do English? Do you get tired?” That was a mistake, because it prompted his next ingenious response: “The doctor said I shouldn’t.” “If you’re too sick to do English, then you shouldn’t be watching television. And you shouldn’t eat candy,” I said, not willing to baby him.

“So that’s it? You’re not going to come to class? Will you come next year?”

“I didn’t promise. And you didn’t earn it, anyway.”

“You promised! I don’t want to ever see you again!”

Outside, I found Lolita, a girl from Misha’s group. “Let’s have English class!” she said. “Guess what, I found my textbook! It was in the playroom, underneath everything.”

We went inside to have a lesson. In the background, an old man began to express his views to a colleague. “If you ask any American nowadays, they will say that the U.S. won WWII….”
at May 30, 2007