Weekdays on the surgical ward


How I survived abdominal surgery for a ruptured appendix in St. Petersburg, Russia.

I survived the night! The nausea was constant. I expected that from the anesthesia, but the medications must have contributed, too. What medications, you may ask? Actually, they never told us. The doctor would tell the nurse and at certain times of day, the IV pole would be standing there with our last name written on up to 4 bottles of fluid. 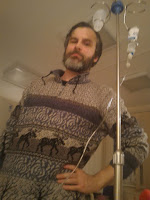 I tried telling myself that I could make it through since I had survived two rounds of morning sickness. I remember vividly the morning sickness with Sophia: 7 weeks along, and I knew it would be a good 3-4 months of it. Each day was agonizing and dragged on. This case felt just as long. And my nose continued to be sensitive.

Plus, now I had this gaping wound in my side, with a drainage tube poking me! It was like...morning sickness plus C-section recovery all in one?

The day after my surgery was Monday, and I met the doctor whom I would end up seeing almost every day for a month. He made the rounds after breakfast each morning, accompanied by a young intern. That first day, I still didn't eat breakfast because the surgeon hadn't looked at me yet. And then he ended up keeping me on a liquid diet. Day 4 of no solid food.

Andrei brought me juice and even homemade broth. It gave me heartburn and I ended up gagging and vomiting. The nurse came in and yelled and said that anyone who'd had surgery shouldn't be consuming anything acidic like juice.

I needed something bland or my stomach was never going to settle. I begged the doctor to let me eat something and he gave permission for me to eat porridge. So Andrei brought me some very watered-down porridge, and it stayed down. He also smuggled me some crackers.

Unfortunately it wasn't desirable to keep snacks in the room due to cockroaches. And I wouldn't be able to get myself to the hall refrigerator and bend down to get things out. So Andrei just brought me little snacks during the day and then took the rest home.

The first week was spent mostly fighting the constant nausea, which distracted me from the bigger issue: The Wound.

I remember the weekday surgeon ushering Andrei out of the room and sitting down by my bedside to do the first dressing change. "For the next one you'll come to the Bandaging Room," he said. All I knew was that meant I had to somehow get myself there.

On the day or two after surgery, the doctor came in and saw me sitting up on the edge of bed. It was very uncomfortable to sit up as the wound was right at my waist and the drainage tube poked into me. "I'm going to try standing up soon," I said. That got me a nod of approval. "Movement is life," the doctor said.

Movement is life. You hear about it in the context of healthy lifestyle, but if you've been seriously ill or had surgery, you know how important it is to remain mobile.

In this hospital, the nurses weren't going to hold our hands and praise us for each little step we made towards recovery. Anyone who'd had surgery had to be brave and take responsibility for getting better. The hospital made it easier for us by not coddling.

I did indeed get called to the Bandaging Room. Our room was at the very end, across from the Procedural Room where we got our blood drawn and IVs were prepared. In the middle of the ward was the nurses' station. And a little further, almost back at the beginning of the ward, was the Bandaging Room.

How I remember the Bandaging Room from when David had his 3rd degree burn! Except that Andrei was always the one to go in with him, hurrying over to the hospital first thing in the morning and holding him down as the dressings were changed.

Now it was my turn. I really could barely walk, and the drainage bag plus long tube were cumbersome to walk around with. I was also just starting to eat food again, and didn't have much strength, particularly in the morning after a long nauseous night on an empty stomach.

I hobbled into the Bandaging Room to face a high examination table. I was supposed to climb up with the help of a footstool and somehow pivot onto my back. Meanwhile, my roommate with the herniated disc had been helping me get up and down from a lying position when Andrei wasn't there. I couldn't do it myself yet. The bandage was on my right side and an IV port was in my left wrist. That first day, the bandage nurse took pity on me and helped me lie down.

A few excruciating minutes later, I was supposed to hop off the examination table and go out to the corridor so that the next person could come in. This time, the young intern stepped in to help me up. As soon as the room stopped spinning, I managed to limp out and back to my room.

Was it scary in a Russian hospital? It was certainly "rustic." I don't think that scared me, though. I feel at ease in a more modern, sterile-looking environment, but I had come to understand that the level of care would be the same as elsewhere. Stress was sometimes caused by certain procedures not being made as comfortable as they could have been with a higher budget. Andrei had left me with a few wads of cash, urging me to accept "premium" care whenever offered. That moment never came, but at times I wondered if a little cash would have made a difference...

...One such experience was a procedure done to remove a particularly large wad of packing material from the wound. I don't know what it would be called in English or whether it is practiced in U.S. healthcare. A little tentative Googling reveals that wounds are not often left open nowadays, because it isn't so practical (economical) to either keep the patient hospitalized until the wound closes, or expect the patient to care for the wound properly at home and get the necessary bandage changes. Well, in Russia it is still done.

"Tomorrow is going to be the most unpleasant part," the surgeon said as he was poking around during a dressing change. "Most people manage it okay." I'm not sure what he was getting at there...what happened to patients who didn't manage it okay? Was that my moment to offer money and plead for them to make it easier? And what could they have done?

I tried to prepare myself for it mentally. After all, people survive colonoscopies with no anesthesia, so perhaps this was similar. And anyway, I'd survived childbirth-twice! Thank goodness for that preparation. I'll pretend I'm giving birth.

The day arrived and I tried to imagine that the doctor was bringing life forth from my body, that God was breathing life through me. It didn't work. It hurt. "I wish I had a bigger opening," the surgeon muttered to the nurse and the intern assisting. I groaned and curled my toes, lying helpless on my back on the examination table. Just like childbirth, there was no way out but through. And then it was over! Whew.

With that done, the surgeon wiggled my drainage tube, scratched his head, and said...nah, we'll leave it in another day. So I limped back to the room, in pain, with my drainage bag in tow.

It was definitely traumatic and I felt a bit depressed, not for me since I was free, but for everyone who has to endure painful medical procedures.