Sleep and SAD-can YOU ignore the weather?


Last year I was all about fighting the winter slump. I read at least one book on SAD, which primarily focused on light therapy. I schemed about changing the light fixtures in our apartment, and bought various "happy" lamps.

The happy light I bought (Phillips?) turned out to be the wrong voltage and my father in law fixed it up for Russian use, but it's the kind of thing where you want to have it sitting on a table near you, and I have 2 very curious/destructive kids. So I haven't wanted to risk having it out on a table, and there it sits in the closet! :(

I also got 2 "sunrise" alarm clocks. They're off-brand because I wasn't sure if I would like it (and again, things get broken quickly around here). I've tried them a few times and even though they claim to brighten gradually, I'm pretty much awake with the first hint of light, and then it feels like I'm at the dentist's or something with a bright light in my face. So, it doesn't feel the same as sunshine. A few times I tried just shining the light in my face when I first woke up to send the message to my body that IT'S DAYTIME NOW despite the dark outside. I didn't find it to be effective, though.

So those were my experiments from last year.

This year my online fitness group did a walking challenge again during the month of November-get outside every day. I did this faithfully for the first two weeks or so. It's supposed to a) help you get more daylight to keep your body in rhythm and b) give you lots of fresh air/positive exercise vibes.

Well, November is definitely the month when it all starts-the grey, dreary weather and desire to hibernate. The walks didn't feel like they helped at ALL.


Also, as we already know, I got sick. I was still going outside almost every day when I first got a stomachache, although some of those were doctor's appointments or errands.

And then by November 16 I was in the hospital.

In the hospital, I surprisingly did not feel the seasonal depression. You'd think that being cooped up all day with fluorescent lighting would be depressing. Nope. I slept horribly and often felt tired, but otherwise didn't feel any winter blah. Towards the end of my stay, we got into a deep freeze and there was some blue sky and snow-that did make me want to go back out into the world.

I often wonder what effect the hospital diet had on me, too. I definitely felt malnourished, but also wasn't eating the usual junk food.


In December, I was still recovering, my mom visited, and we were decorating for Christmas. Obviously that time of the year is the darkest and therefore it's hard to find the energy for various pursuits.

And just as that is setting in, it's time for fireworks! Particularly around New Year's, there are lots of fireworks. On New Year's Eve we were all up about until 2 a.m. or so. We even went outside after midnight to see some of the fireworks up close (too loud for me!). We then spent about a week trying (mostly unsuccessfully) to get out of bed before noon. The following week, I tried to get us waking at a more normal time so that Sophia would get back to napping. Result: by Friday, we got up at a normal time and Sophia took a nap. On Saturday, Andrei was home and we all slept in. :/


Then we moved into winter time and have basically been having late mornings since those holidays in January. I gave up trying to set an alarm to get on a different schedule.

But even though we were waking up late, that just made me stay up later in the evening. Then the next morning I would be so groggy...Andrei, too. And we would get such a late start to the day, with the grey weather outside.


Also, Sophia gave up napping. Which makes sense given she hasn't been getting up early and then getting hours of outside time. But it makes me stir-crazy not having a break during the day, and I guess leads to needing more time to unwind in the evening.

February is kind of a game-changer in terms of additional light. We're needing the shades in the bedroom now! We can take afternoon walks again and we've even had some sunlight. It's kind of a teaser as winter is still lurking and the snow could stick around until May. But this is usually the point when I stop obsessing over hygge and light therapy.

So we kind of made it through another winter. 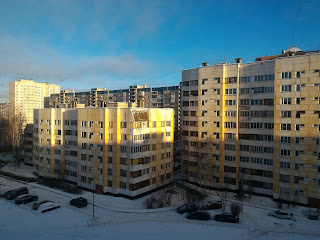 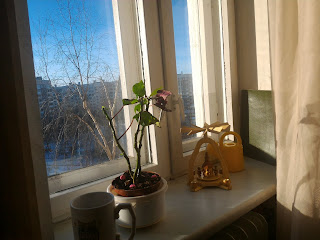 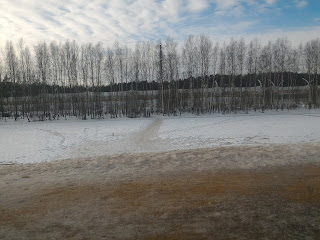 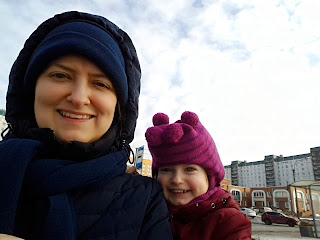 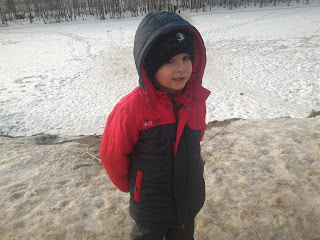 -I guess if you are leaving for work/school at a specific time each morning, you can at least get your body in rhythm. But the drawback to that is that you'll likely be indoors during all the daylight, leaving and coming in the dark, still giving that jet-lag kind of feeling.

-November-Feb are the darkest months. That's 3-4 months of needing to plan the day carefully to get outside during the actual daylight. In terms of schoolwork (see other posts), we'd need to bump some of it into the afternoon during those months in order to fit a walk in. But that still leaves a good part of the year that we can do morning school and then get outside.

-Maybe the starkness of the hospital light made me more alert (even though I was pretty tired). I lean towards subdued lighting because I like a cozy atmosphere. But I realize that to be alert and productive, the harsher light is better. In the kitchen work area, home office maybe...anywhere else? And then the other rooms can be the cozy ones. 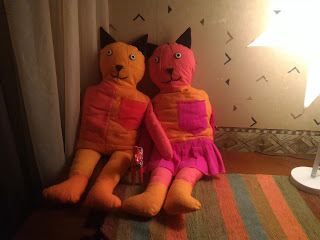