Where the month went


No posts on my blog for November. But there's a simple explanation for that!

Let's start with a month ago where I'm sitting in the ambulance. After 2 WEEKS of abdominal pain, an ultrasound has finally revealed a ruptured appendix. I wonder at what point it ruptured and whether it could have been detected sooner...such as 5 days earlier when I was at the doctor and they said "it's probably not your appendix, but I'd have to see the lab work..." 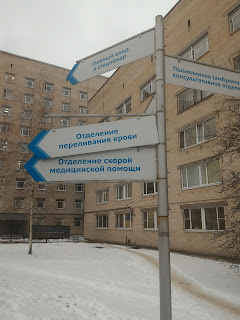 Once they saw the appendicitis on the ultrasound, the medics at the private clinic were quick in making a few phone calls and arranging transport to the hospital. At this point I was actually somewhat calm and relieved that the source of pain had finally been identified. I was hoping for an easy-peasy laparoscopic procedure and then I'd be done with my appendix for life! In fact, almost everyone I talked to seemed quite cheerful about it. While waiting for the ambulance, I saw the gynecologist whom I had seen earlier in the week in an attempt to rule out other problems. "I have appendicitis!" I announced, and she smiled and said "See? There you go!"

I had thought I was organized in grabbing my passport on the way to the doctor's office. However, when the paramedic asked to see my papers, I opened up the passport to find David's face smiling up at me. I'd grabbed the kids' passports instead of my own documents! They took me anyway, though.

Sitting in the back of the ambulance was a bit annoying because there were no windows. I could see out the front windows a bit and recognize landmarks at times. The paramedic had mentioned the address of the hospital, and I was pretty sure of the name: "St. Elizabeth's"! When the surgeon at the private clinic was making the phone call, I heard him saying that I was American...BUT that I spoke Russian. I like to think that helped in the long run. I wasn't limited by language and I think they selected a hospital with a good surgical unit-if nothing else, to make up for their failure to diagnose in a timely fashion.

Although I ended up spending 5 hours getting admitted, I had some sort of assignment for most of that time. Once I spoke to a doctor, they would give me something to do and then I would come back for my next task. Although the ultrasound from the private clinic was taken into consideration, I had to repeat most of the tests: blood/urine testing, chest x-ray, EKG, gynecologist consult, ultrasound, and abdominal exam. When I went into the bathroom to do my sample, most surfaces were covered with blood! In Russian hospitals, the blood and gore is not hidden as well as in the U.S. (from what I've seen in my limited experience). Maybe just related to how the hallways are mapped out, but I saw a few unnerving sights. Nothing too bad, but things like patients being bumped along on gurneys right past where we were waiting in line to get x-rays. There were lines for each procedure, so that kept me busy for awhile.

When the doctor in admittance saw my ultrasound, I thought he said I would need an operation, but then he seemed unsure. I didn't understand at the time that my condition was serious. I was eager to get any operation over with, but at the same time I was impressed with the thoroughness of the diagnostics. And as I have free healthcare in Russia, there was no need to worry about how much each procedure cost.

My last stop on the first floor was to see a GP to take my vitals and then the doctor pointed at the elevator and told me to go up to the 8th floor and see a nurse about a room assignment. When I got upstairs, I was temporarily flustered because I didn't have a change of shoes, nor booties to cover my outside shoes, and Andrei hadn't yet arrived with my things. But they told me to go ahead and check in anyway.

The nurse on duty told me to go down to the store on the second floor and purchase a liter of water in order to mix up a contrast dye solution: I was scheduled to have a CT scan done at 8:30 pm, and it was now 5:00. At this point I hadn't had anything to eat or drink since the night before, so I was glad to be allowed to drink water.

I walked into room #16 where there were 5 beds, 3 of them occupied. I met my roommates: Marianna, Olga, and Zina. Most people in this ward suffered from appendicitis, gallstones, kidney stones, etc. But I would later learn that Olga, in fact, had a herniated disc: the neurology unit had been full and she languished in the surgery unit, not being attended to by her actual doctor.

I got to work sipping the contrast solution, and Andrei came by with important items: my passport/resident card/insurance policy, slippers, changes of clothes, soap/toothbrush/towels, and dishes for meals since the kitchen didn't have enough for everyone. The hospital ward itself was in disrepair: so far, my blanket cover had holes in it and the sheets were faded and mismatched. That's just one example...

After Andrei left, the nurse came by saying she was taking me to another post to put a "catheter" in. I didn't understand the purpose of whatever procedure was going to take place. As we turned down the hallway into a ward similar to my own, the room we ended up in was just a regular room for drawing blood. "What's this for?" I asked, unable to submit to the mystery element of Russian medicine. "It's for the CT scan," my nurse answered as her colleague took my WRIST and began inserting a needle. Oh. It was an IV catheter, whereas I had thought my bladder would be involved.

The catheter procedure got messy and I recalled a similar experience that had occurred while in labor with David. Was I destined to have horror needle pokes for life? But I got all wrapped up neatly with gauze and tried not to think about it. I wondered if this nurse was an "expert" and that's why my nurse hadn't just done it herself...what would have happened then?

In no time at all I was lying in my bed being pumped with drugs. I felt all tingly and light-headed afterward-not fun.

Finally, the moment came to go back down to the first floor for the C.T. scan. When I got up onto the table, they inserted something (more contrast?) into my IV port. I felt sick from the antibiotics and lay there shivering, from cold or something else. I was glad when it was finally done.

The doctor had come by once or twice to check on me and examine my stomach again, but now I had to wait for him to read the scan. I still didn't know if they were going to operate or not. It was Friday night and the weekend shift had started. I wasn't allowed to eat or drink, in case of imminent surgery.

Lights out was at 10pm, and I still hadn't received word from the doctor. "They would have come and gotten you by now if they were going to operate," my roommates assured me. But what if they were wrong?

I tossed and turned all night on the thin mattress, listening for the sound of a gurney coming to take me away...