Got to get a July post up, not sure how the rest of the summer will go! As I probably say every year, just as September feels like a fresh start, summer always feels like a big deadline. Even though we normally travel for less than 2 months, it feels like I have to reach the end of my to-do list before we go away. If I haven't seen someone all year, it has to happen now even though it could happen in September. But now that we're leaving quite soon, I've abandoned all the lists and have focused my attention towards the suitcases and provisions across the pond.

Anyway, we did get a bunch of little projects done even if it wasn't as much as desired. A few examples are below. Little organizational fixes that will make life easier even if they're not anything fancy.

I'll do the fancier one first, though. This was hand-made by friends. I love being able to put up decorations that are made with love and not from IKEA. :)


Next, some additional shelves for the floor-to-ceiling wardrobe. It was half-outfitted with shelves, and then there were a few sections with a rail for hanging coats. BUT it's a shallow wardrobe, so that would fit maybe 1 winter coat? Like it's made for someone's dress pants in their bedroom and not front hallway. Didn't make sense to me so we're putting shelves everywhere and hooks elsewhere in the entryway. The wardrobe also has cleaning supplies so it will get good use...not sure what to put on the top shelves, though!


Now for more of the wardrobe...it's the only logical place for medicines. I tried a sort of tiered-system and finally went out and bought some containers. Mainly I took a while finding containers that would fill up the space exactly. Still not really ideal, but organized by type and hard for kids to access.


Something small: a slipper basket. We had just been using a random cardboard box, and the basket is a big improvement. Now I just need to clean up shoe clutter. We have a shoe cabinet but let's be honest, no one wants to take the time to put their shoes in a cabinet each time they come inside...plus the shoes are dirty... 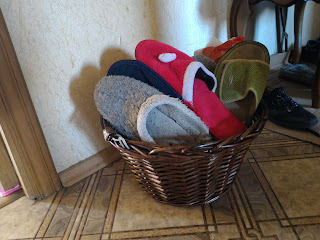 You can't really tell, but I removed office supplies from the top of this vanity. I think I will replace the mirror (that we had removed) and remove the bulletin board. This piece of furniture is not very useful, but I don't have the heart to give it away just yet, especially as it's part of a set. I guess eventually we will move our bedroom back in here and it will hold some of my clothes. 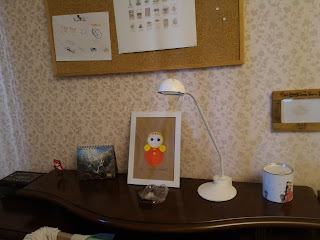 Finally decided on an art set-up for the kitchen. Bought an IKEA easel, took it apart, and Andrei mounted it on the wall. I pictured having a paper roll up for David to stand there and draw. For now the pack n play is there and we've got some alphabet stuff going on. I also cleared a shelf for essential art supplies in Sophia-proof containers. So David can open the cabinet, get out a tray and his play-dough, and do a little project. Or paper and pencils. Our table is too high to sit/stand comfortably, so the next thing on my list is to get a higher chair for David so he can finally sit the right way, and not tumble each day from our current kitchen chairs like he tends to do (see: broken collarbone from last year).

As usual I've broken all the rules and jumped into projects before decluttering or even washing the dishes, which is like the first step in all of the organizing books. But doing little projects (or asking Andrei to do them) makes me happy and makes me more motivated to clean, sort of.

Going to bed now without doing the dishes...