Monday morning. Woke up assuming Andrei would be around for a few hours this morning, but it turned out that his class schedule rotates, so he had 2 classes as opposed to one this time, and had to be on his way. I got to work on breakfast for me and David. I shared my egg with Sophia even though she's not a year yet and could have a reaction.

We found out yesterday a friend was in town and was free to spend the day with us. Sometimes spontaneous visits are the most successful because there is no time to go back and forth about whether it will work out...we have been trying to get together with so many people with little luck.

As soon as Sophia was asleep I had about an hour to clean and spent 15 minutes in the bathroom, 15 in the living room, and 30 in the kitchen....which still was barely enough to scratch the surface. ;)

Another thing going on was my laptop not functioning...as I mentioned, some of the keys aren't working due to a water spill. Andrei took it with him to drop off at the shop, so David didn't have his show with breakfast. I was actually interested to see how he'd do with less screentime. Andrei's computer was on, but that's not in a central part of the apartment, so not quite as attractive for David to be in there. He did go in from time to time and watch a little.

Anyway, we got through breakfast and then when David wanted to be entertained, I let him play with a pan of uncooked buckwheat (think grains of rice). He was in a pretty calm mood.

Our friend Emily came and we had a little borscht for lunch. We've recently gotten into playing a version of 20 Questions, which is fun. I love that David is old enough for games. He might be ready for board games, too. With the guessing game, we use the first sound of a word, not the letter. That keeps him entertained some at the table, but he was really wandering around the kitchen. With a movie on he can take an hour to eat a few bites, so I wanted to see how he would focus without a movie on. Turns out, not much better! He was eager to show off for company and along with dumping the buckwheat grains on the floor he was excited to show Emily some tricks. She works with preschoolers though, so had her own bag of tricks!


David kept talking about going for a walk with Emily-his own idea! I decided that would work out, so we all managed to get dressed and outside, just as Andrei was getting home. He had also called to say the computer techs couldn't do anything for my laptop. They suggested buying a new keyboard and we weren't certain that would be cost-effective. Kind of disappointing that they weren't more helpful.

Andrei decided to go inside and have lunch before picking up dinner ingredients at the store. We proceeded to the playground.


David is obsessed with babies and toddlers at the playground. He follows them around and tries to hug them, etc. He also played a little with a boy in our building. I guess those should technically be his friends. The other kids seem to all know each other because they attend the preschool behind our building. I can't motivate myself to make small talk. So we just caught up while trying to keep track of David. At one point he was out of sight for a few minutes and Emily said that he had gone beyond the playground territory. So we had to go look for him. When she mentioned the preschool territory (set apart by a fence), I wondered if he had gone inside, since his grandmother had taken him in there before. The gate was unlocked, so we went in, where the kids were having their evening recess (around 5:30 pm). A woman that used to attend our church actually works there, and I saw her on playground duty. No sign of David's blue jacket, so on to check the next playground. Emily went ahead and found him there. He did look somewhat ashamed of having run off, but still seemed very bold and clueless about it! Hopefully that won't happen again, especially with his grandmother, as it's hard for her to keep up.

We moved on to another playground (this is number 4 if you're counting) that was less crowded and had a sandbox. David filled his pockets with rocks. I assumed that we would intercept Andrei on his way to/from the store. But when I gave him a call, he was still at home finishing up lunch. So we hinted that we were cold and got him to head outside. Meanwhile, Sophia was refusing a nap. She doesn't seem to nap in the stroller outside like David did. Andrei helped carry the stroller up the steps so we could get inside. 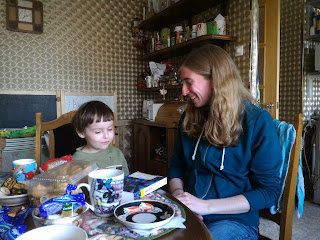 Once home, I finally got Sophia down for a nap and we had tea to warm up, spoiling our dinner appetites. We also got the news of the hurricane in Moscow, to where Emily was returning on the overnight train. David immediately invited her to stay and live with us! He said she could share a bed with me and Sophia. In some cultures, maybe! He is very inclusive, though he recognizes that the neighbors are not family members...he mentioned wanting them to kick the bucket (euphemism) so that there would be enough room for him to live with his 16 children when he grows up!

We suddenly realized that Emily needed to eat and make it to the train station on time, so Andrei whipped up some dinner and we had another meal before seeing her off. It was not without drama as David's yogurt immediately got knocked over and we had to reseat everyone. Then after Emily left, it was hard to get everyone to sit down again and there were some acrobatic performances in the living room.