While I'm facing the reality of a post-partum body and having a newborn all over again, it seems like a good time to review the miracle of Sophia's birth!

(for anyone just tuning in, we live in St. Petersburg, Russia, but I traveled both times to the U.S. to give birth...)

There were a few things about David's birth experience that we changed right away, or at least hoped to do differently. For one thing, I switched from the local Ob-Gyn in my hometown to a midwifery practice in a neighboring town. Longer commute, but a very caring community for the most part. Different birth plan, too-but I'll get to that later.

As my pregnancy progressed, I was often measuring ahead of schedule, and wondered if this baby might be early. I also had gestational diabetes, though. Once I got on a diet, my weight gain slowed down and things seemed more normal. But I still wondered if I might go early.

Once I got towards my due date, though, I had zero symptoms of labor. Same as with David! I mean, not a hint. I barely even felt pregnant. I was carrying really low though (low tone in abdominal muscles), and was told repeatedly that baby had "dropped" and that I looked "ready." Actually, I started getting those comments about 2 months before she was born. 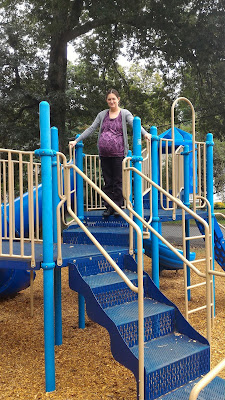 So, the due date...I'm in favor of letting labor start on its own. I'm not even really into "natural" induction methods as I feel like those will only work if labor is imminent anyway. Basically what they do is give you some contractions. Who wants false contractions? Not me!

The only issue with being overdue was that we had a travel date for heading back to Russia, with a chain of paperwork to complete before that. Plane tickets can always be changed, but Andrei could only miss so much work. And my brother's wedding was coming up, too. I thought back to all the miserable times I'd had to get travel documents, and it was not how I wanted to spend my time that was meant for recuperating postpartum. I didn't know if I could handle that level of stress. So I anxiously waited to go into labor, and did lots of calculating and recalculating in my head as I tried to sleep at night. I looked up addresses and made to-do lists, not sure how I would be functioning after the baby was born.

We kept making tentative plans that we could cancel in case something developed. Got both David and Andrei to the dentist, did some business at the bank, made some necessary phone calls, etc. Lots of online shopping! I had also gotten David's Russian visa application in the mail so that we'd only have one visa to expedite.

By this point everyone was starting to ask if I'd had the baby yet. And of course the next question was always whether or not I had any signs of labor. I didn't want anyone asking, not even the doctor. I felt sure the baby wouldn't come if I didn't have some peace and quiet. I knew that exercise was supposedly good, but it was too hot outside and I didn't want anyone looking at me. Then of course I hoped that feeling cranky was a sign of something starting...