The 4 yr old is a challenge right now! I wonder if he is just now reacting to having a sibling. I keep having unrealistic expectations. In my head, if I give him undivided attention for a few hours, he will let me take a break. Or if I let him kiss his sister once, he'll be satisfied and leave her alone and not continue to harass her. What DOES sometimes happen is that if I bite my tongue, he will stop the offending behavior since there is no reaction. But obviously I can't let him harm himself or others. I couldn't ignore the toy-throwing or opening the oven door repeatedly.

There are moments when he seems repentant and it seems like we've figured something out. Like when we argued and argued about naptime and then Andrei came home and intervened, but then David still asked for me and we lay down with our arms around each other and went to sleep. He still wants to please me even if it seems like he wants to hurt me. 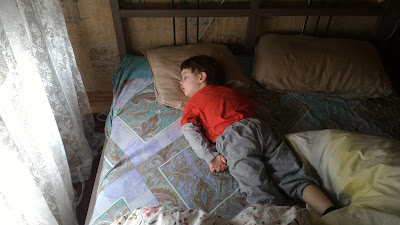 David's "I'm sorry" phase seems to be over...when he used to come to us of his own accord and ask for forgiveness. Even when we had already forgotten. But he IS in an "I love you" phase, and that warms my heart. He can be a little resistant toward spiritual discipline, but prays spontaneously sometimes; yesterday's prayer was that I would have 100 babies, that would all come safely.


Underneath he is just a little boy who wants to feel like he is the center of somebody's world. Sometimes I am distracted because I'm lazy and sometimes I'm just overstimulated and can't get into all the make-believe. I can't be everything to him, so it's a good thing I'm not raising him alone!

Now that we have an "easier" baby, I sometimes wonder if David did have some kind of birth trauma, especially with his breathing problems at birth.

Sophia just turned 2 months and sleeps through the night. Not every night, but it's basically not an issue. Admittedly, putting her on her tummy to sleep has helped. She sleeps in her bed for several hours, and then I feed her and she sleeps next to me until David wakes up. If undisturbed, her next wake-up is usually 10-11. I have to get up with David, but at least we are keeping normal day/night hours. Tiring, but not hallucination-inducing.

As a baby, David always nursed for hours day and night. This time I have an abundance of milk and Sophia is done in 5-10 minutes. She follows an eat-play-sleep pattern like they talk about in baby books. It just happens naturally. But of course there is "fussy time" as well.

It's definitely hard to have a long-range perspective and believe that this period won't last forever. At moments I feel more normal, but I also have a LOT of help. It's really still "extra" to prepare a meal or clean the house a bit. When I look at journal entries from before Sophia, I can see that life with David eventually calmed down a tiny bit. But then I start wondering why we had to go and complicate things. So it's still a bit of the survival game around here. 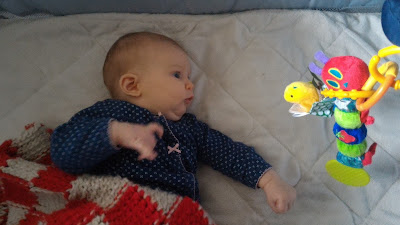 People talk about how the baby days go much faster with subsequent or final children. I am definitely trying to enjoy Sophia's baby days, but I look at David and don't resent him growing up. He is still a baby in many ways and there are lots of fun milestones ahead. So I will try to drink up Sophia's babyhood, but also not be sad when we're past the challenges of the newborn phase.