Back to apartment life


As we get back to city life, it prompts me to compare different living accommodations. Would you rather live in a bigger or smaller space? I think as humans we often long for an upgrade, but at the same time a smaller home can seem pretty attractive. I liked living in a 1 rm apartment (that's not counting the kitchen and bathroom) the first year we were married, and living with roommates was always fun as long as I could have some privacy and space to do things like cook. It can be easier to decorate, too. All my little framed pictures look silly on a bigger wall.

Some of those "tiny" houses are pretty cute, the ones that are popular right now and even have their own show on HGTV. But I wouldn't try that with kids.


So we're back to our medium-sized apartment after staying with my parents. I like being all on one floor! Makes it easier with kids, laundry, etc.

The noise level is another story, though. Our walls are pretty thin! It's typical of our building type, but there were a lot of features that had us sold on this apartment.


While in the U.S. we heard plenty of noise from the neighbors: lawn-mowing, etc. And here there is often someone drilling. We can also hear conversations if someone is talking loudly. But I wonder if there is a difference psychologically when you overhear neighbors you're friendly with (my hometown) vs. neighbors you might not have actually laid eyes on in person (our apartment complex). Is it harder or easier to put up with the noise? In which situation is it easier or harder to complain?

To talk myself out of being irritated with someone, I try to think of excuses on their behalf. That is my way of "loving my neighbor." For example, when I don't understand just how the upstairs neighbors could be SO noisy, I wonder to myself if WE sound that noisy to our downstairs neighbors. When it sounds like they're moving furniture above us, I tell myself hopefully that they're getting the pull-out couch ready for bedtime.

But there is definitely a certain degree of rowdiness. Again, I tell myself, I could have done something similar in my college days. But sometimes it is downright odd. For example, they might turn on the loud music on a Saturday morning and leave it on all day. Or on a weeknight, STARTING a party at 3 am, and continuing until 7 or 8 am. Last night (Sunday) was another time when they started around 3 or 4 a.m., and then it just kept going. Then in the afternoon (Monday) I went to take a nap and there was loud guffawing for a few hours in a row. Wouldn't they be sleeping off their all-night party? That's just downright odd to me. And while I'm learning to ignore this particular problem, it still has me scratching my head sometimes.

Another issue is that the water isn't drinkable. Of course, I'm used to it by now and have a system for purifying the water. It's become second nature. But David was a lot more independent over the summer, pulling a chair over to the sink to wash his hands or get himself a drink of water from the faucet. We have to figure out a way for him to safely perform those tasks here. The water can come out scalding, so we really don't want him experimenting too much. Also, his current preoccupation with germs/bacteria means he won't touch anything while going to the bathroom, so lots of trips to the toilet with a buddy.

And of course, the final thing is that we can't be slipping our shoes on and running into the backyard to water the flowers. It takes a few more steps than that to get outside. But on the plus side, there IS a new playground right in our backyard! And many more throughout the neighborhood. 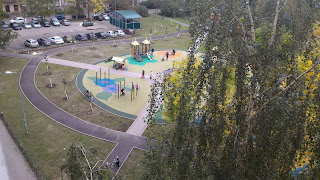