Traveling (internationally) with a 3 yr old


Behind the scenes of our most recent getaway...


Basically been working on this post for a month now, and figured I'd better get it up before we travel again! (hint: in less than a week)


David turned 3 shortly before we went on our trip to the UK this summer. No more nursing this year, but still in diapers. Pickier than ever and co-sleeping more than before!

As you've probably discovered when traveling with a young child, you have to plan ahead of time to make sure you have enough hands for all the pieces of luggage/gear. Out of "baby" gear, we only brought a stroller this time. We don't use a carseat on the plane, and rent or borrow one when we arrive.

If we had a newer or more expensive stroller, I might think twice about bringing one, since they can get broken in luggage holds. But ours is on its way out!

Taking the stroller means that one person's hands are occupied, but it also means that the child is restrained and out of harm's way!


As far as layovers, 2 hours is perfect for stretching your legs and making the necessary stops before security and boarding. 3-4 will do if you would also like to sit and have a meal. Less than 2 would probably make me nervous.

For in-flight snacks, we discovered last year that gummy bears work well and also prompt chewing/swallowing mechanisms for those altitude changes. However, David had a cold on one of the flights and his ears were really bothering him! :( Any other good suggestions?

I don't usually have the time (or motivation) to make up activity bags for the journey. In general we (or his grandparents) just buy some individually-wrapped toys such as cars, and take a new one out periodically. We got through the whole trip with a bag of 10 toys or so, but I didn't show him the source so he wouldn't keep asking. New books are great, too. David is not really into coloring, but can tolerate stickers. Like any 3 yr old, he can watch favorite cartoons for hours on end. I didn't have any downloaded, but we used them sometimes in restaurants where there was WiFi.

And again, favorite snacks can help kill time, especially if they are packaged individually (sorry, environment).

Kids can be disruptive, but they can also provide great comic relief! On one flight, David made friends with a row of Brazilian women behind us-they were so friendly and he climbed right into their laps.

As I mentioned above, David is extremely picky right now. And being in a new place is not necessarily going to prompt the courage to try something new, even though of course we always hope they will be hungry enough to try it, right? :) So in general David had a very limited diet while we were traveling. While in a self-catering location we kept fresh fruit, cheese, and some carbs on hand. We bought some Cheerios (not available in Russia) and he ate those constantly. Of course I feel guilty that he didn't eat a more varied diet, but I feel that we made other choices available to him, if you know what I mean.

When we got to London, we didn't have access to a refrigerator. David lived off bananas-he couldn't get enough! And truth be told, his digestion did slow down a bit, but he really craved those bananas for some reason. Sometimes we would also buy something like grapes and just eat them before they wilted.

From most menus, David will only eat either french fries or plain pasta with some ketchup or soy sauce. Plus bread. In a Mexican restaurant, he ate some tortilla chips.

My survival method was to not worry about decorum too much. I hate saying that because I obviously want to teach good manners. But, we had to eat. There was a controversy in the news this summer about a family on vacation whose screaming toddler ruined the atmosphere for everybody, and a staff member yelled at the family, or something. So I would rather get him something he likes in short order, and not let it get to that point. Of course, if I let him eat first, he is then done within a few minutes and we have to take turns entertaining him while the other one eats. That was pretty much how we spent our vacation.

I got in the habit of ordering a kid-friendly appetizer as soon as we were seated, and asking for the bill as soon as possible. David did make messes, and I just tried to leave a good tip. I felt like that was the best we could do. 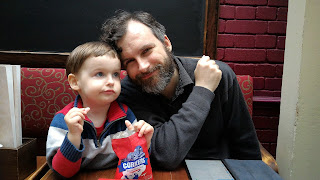 Last summer, David was 2. A few times we were traveling, and he woke up shrieking panicking in the middle of the night. After that, we just let him sleep in our bed rather than him waking up alone in a strange place.

A year later, we are still pretty much doing the same thing. On our first night in Scotland, David had some bug bites that he had gotten while still at home. He lay in between us itching them for half the night! When we had finally all gotten to sleep in the wee hours of the morning, the fire alarm went off and we had to evacuate. That was an interesting start to the vacation!

Once we got to our next accommodations, we found that they hadn't even made up a bed for him. However, the one bed was roomy enough, so he ended up sharing again with us for that week. I actually slept quite soundly in Scotland, as it was very quiet.

In London, they had made up a twin AND a sofa bed in addition to the queen, so we had a whole wall of beds! And during those few days we tried various combinations based on who was sick, itchy, achy, etc. But mainly Andrei let me pick. :)

I don't always sleep well when the bed is crowded, but bedtime goes a lot easier with David when I can just lie down next to him. And he felt more secure knowing that we would be joining him.

When David was born we were determined to continue our various excursions, and not let him slow us down in travel. The stroller is a key part of that, as he can sit back and relax as we visit museums. However, sometimes the fight isn't worth it. Sure, we've found ways to do sightseeing with a young child, but I can't say we really enjoy it much at this point. So a reduced itinerary and more child-friendly excursions are more preferable. For example, running around on castle grounds can be fun, but steep drop-offs and exhibits labeled "don't touch" aren't so relaxing. David went on the London Eye with us and was fine-except for trying to open the door and get out! 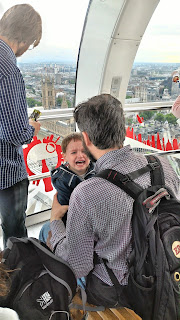 This was the main reason we brought the stroller. When David was 1 and his cousin Benjamin was 3, we did a beach vacation. But David took 2 naps a day and Benjamin's one nap was right in-between, schedule-wise. It seemed that all we were doing was tiptoeing around! In Scotland, we tried to plan to be OUT during naptime so that David could take a stroller nap. It worked most of the time! 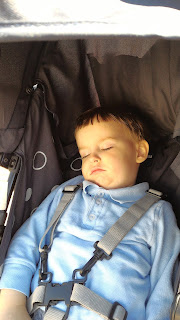 I was also planning a post on sickness while traveling, but ironically I'm sick at the moment! So it will have to wait...