Life as we know it has halted, for reasons which I'll explain another time.

But in the craziness I have still managed to sneak in a project here and there. I tend to hoard craft supplies, and this has increased since we bought an apartment. Also, the fact that we don't have a recycling center nearby means that I save glass bottles and paper/cardboard containers. I love repurposing them and feeling like I've simultaneously satisfied my creative streak and justified my hoarder tendencies. 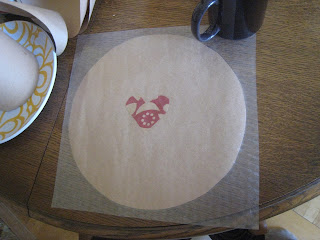 While the image above is no masterpiece, it's a quick fix I created to make mealtimes a little less messy. Our grown-up nice placemats are in a dirty laundry pile somewhere with stains I don't know how to remove, and I want to look for a different color anyway.

I took some contact paper that has been through 2 apartment moves with me, and cut out an image to go inside. Like I said it isn't the prettiest, and probably isn't long-lasting, but having a few of them on the table makes things look neater. It's also something that could work for holiday decorations, with some brighter colors. Or making boxes look fancier (which is another idea on my list).

I figure maybe some of you creative people could take the idea and run with it...

P.S. I mostly did this project while David was stuck in his high chair chewing on something.