In which we apply for a civil wedding...

One of the hard things about getting paperwork done in St. Petersburg is that most offices (including banks) have a lunch break from 1-2 or 2-3 pm. So if you get there too close to the lunch hour, you will have wasted time waiting in line and then waste another hour waiting for the place to reopen. 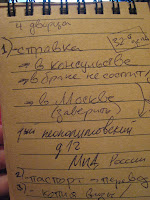 Andrey was free at 1 pm, the lunch break was at 2 pm, and I needed to leave for the orphanage around 3 or a bit later. So we basically had an hour before lunch in which to get everything done.

I arrived a little earlier to reserve a place in line. I was already mentally rearranging my schedule and calling the orphanage to tell them I couldn't make it. Then I walked up the steps and turned the corner, expecting to see a full waiting room. It was empty-HA! continue reading/-

I poked my head into the office and asked if they were still open and if I could have an application. The woman started asking me about our citizenship and what date we wanted, but Andrey wasn't there yet. Nevertheless, she took a look at my documents.

I really hadn't been worried about my documents; it had all seemed easy and straightforward compared to applying for residency. In a way I was glad I had been through that whole process, so that this would seem like nothing.

She looked at the affidavit which I had just gotten back from Moscow. "This will need to be translated."

"What?" I was confused. The whole form was in Russian. What language did it need to be in?

"This line here, in English." I looked at what she was pointing at and it was a footnote under the signature: Do not sign affidavit until instructed to do so. That was for notarial purposes! She also pointed to a few lines that said (in English), Russian Federation, U.S. Embassy, Moscow.

"But I can tell you what they say!" I translated them for her, but she shook her head. "That doesn't matter. WE don't know what it says."

I thought I was going to burst into tears. Another trip to the translation bureau? Another few days to wait, now until next week? Sometimes it seems like the small obstacles are even more upsetting than the large ones. I had thought we might have a time crunch, but I hadn't expected everything to be delayed because of one little line of text.

She took the affidavit and announced that she was going to show it to her colleagues, then ushered me back into the waiting room and marched into an inner office.

I called Andrey, who was on his way. I told him the good news, that there wasn't a line, and the bad news, that I needed a translation. Just then, the lady emerged from the other room. "A translation won't be necessary." No translation! Hurray! Andrey went to the bank to pay the fee while I stayed put to monitor things.

When A. got there, we took turns filling out our parts of the application form while the other looked in the computer database for dates that were open. Having a civil ceremony at one of the wedding palaces is by appointment only. Of course it makes sense, since each wedding party needs a room for the ceremony and arrives with an entourage. We would have preferred to just show up at an office and sign a form, but for some reason the fact that I'm a foreigner means that we have to go through the wedding palace.

A few other couples were showing up, but most were leaving as they learned the spots for the summer were all filled up. A potential bride could be heard moaning, "But September is too COLD!" As for us, we were aiming for spring. We'll get the bureaucracy over with and just enjoy our church wedding in the summer. We hope.

The lady was a little exasperated with the way we had filled out our forms, but we eventually got them straightened out and picked a date, all by her lunch break. She printed out our names on a fancy invitation.

And then we realized that we were getting married very soon...on paper, that is. The plot thickens.