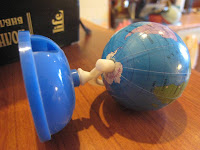 I'm not quite sure how I feel about the topic that I'm about to discuss, but here are some initial thoughts, at least.

I was visiting a children's hospital the other day and someone handed me a pamphlet to read (in Russian) entitled "The Truth About Vaccinations." It seemed to be put out by the Orthodox Church and was all about how vaccinations are evil (literally).

The person who read it before me had helpfully done some highlighting, so I scanned those sections to get the gist of it. In addition to accusing the rest of the civilized world of deliberately leaving Russia in the dark about vaccination risks, it quoted some U.S. public figure as saying that we ought to reduce the world population by 90%... with the vaccination risks being a key part of that. read more/-

My first thought was, leave it to the Orthodox Church to accuse us of systematic extermination.

But the thing is that it isn't good to blindly believe (or doubt) any point of view. I needed to investigate.

It's common knowledge that many medical treatments and other products are distributed without knowing what effect they could have on someone's body in, say, 10-20 years.

I suppose I even knew that some things were being tested in third world countries, but I had never thought of it as intentional malice. Just oversight, perhaps. Or haste...trying to get a treatment out there sooner, to prevent further spread of disease. But at a cost.

The more sinister side of "green" efforts is that many campaigning for using less resources point to population as a factor. Less people, less consumption...right?

I had always associated Planned Parenthood and other abortion methods with an effort to allow people shirk the responsibility that comes with having extra-marital sex (or with having married sex while not wanting children).

But maybe something bigger is at stake?

If pro-lifers usually quote abortion statistics to emphasize how many unborn babies have been killed, does that mean that advocates for "saving" the planet point to how many trees have been saved by aborting a life? I'm not trying to be cynical here, just trying to figure out the logic.

I was actually a bit sickened to examine a "neutral" article on population control in wikipedia and notice some suspicious language. Though opposition to this effort, of course, exists, the examples given are often used in conjunction with concepts of success and progress.

"Iran has succeeded in sharply reducing its birth rate in recent years."

"According to government officials, the policy has helped prevent 400 million births." (in China)

-I wonder what they mean by "prevent" here. How were they able to count? How do they know how many children a family would have had if their fertility had not been tampered with?

"We two, ours two ("Hum do, hamare do" in Hindi) is a slogan whose meaning is that of one family, two children and is intended to reinforce the message of population control." (in India)

-Just what is the "message" of population control?

I read some unsettling things about initiatives disguised as charity efforts actually being used to spread disease. Is it true that efforts are being made to target specific nations and/or socio-economic groups?

I suppose it isn't something new. But I don't want to think of my country as being responsible...

Blessed are the meek, for they will inherit the earth.-Matthew 5:5