My room is in the attic. There is a storage tunnel on the outer perimeter, and little doors are placed here and there to grant access to the storage. 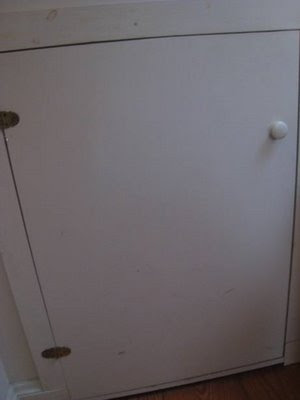 Late at night, when the lights are out and all is silent, The Animal comes out. I begin to hear a series of scrabbling, squeaks, and the pitter-patter of a living creature. I can hear him as he makes his way from one end of the storage tunnel to the other. I can put my hand up and touch the wall where the noise is, and imagine who is on the other side.

I stuck a camera in and snapped a picture during the daylight hours. I don't see anyone there, do you? 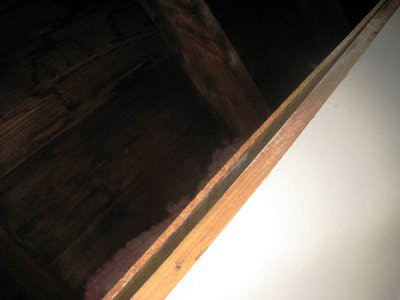 Once, I heard a thump against one of the doors. Curiosity got the better of me and I opened the door a crack, to see an injured bat flapping around inside the storage space.

I read somewhere that a bat colony can live in the same house for up to 100 years. It can be almost endearing to think of a lone creature; a solitary mouse or bat or even some bigger creature. But a colony? Yuck.

Sometimes I imagine flinging open the door and poking my head in just when the noise is at its loudest, to finally see who my neighbors are. But the thought is too frightening. Lately I have entertained thoughts of making use of a hidden camera.

About once a year, a bat makes it way into the main part of the house, and we think, finally, The Animal has been roused from its roost. But then night comes and the signs of life can be heard once more.
at December 09, 2008