A tribute to my alma mater

William and Mary had its Homecoming last weekend. The Russian department sent out an invitation to an alumni reception, and per tradition it started a chain of responses from various alumni about their current locations and fond memories of Russian class.

The e-mails persisted to the point where I even dreamed about Russian Studies! And I began to do my own reminiscing...

I started taking Russian during the second semester of my freshman year. It seemed like it would be useful since I traveled to Russian in the summers and had one (of two) new adopted sisters at home. I had been interested in Hispanic Studies, but then I found out that everyone else took Spanish too. Russian seemed a little more unique.

Soon after I began taking Russian, I started getting "Russian Club" e-mails inviting me to various functions. I didn't know exactly who or what the club was involved with, but I wasn't so sure I could join another organization as I was already fairly busy.

Meanwhile, I didn't know too many people in my Russian class in those days, but I was pretty sure that we were all taking Russian for different reasons. Some chose Russian to fulfill their language requirement. Some had a Russian ancestor/girlfriend/roommate/etc. Many were fascinated with some aspect of Russia: Pushkin; Stalin; borscht...

I was interested too, of course, but it wasn't so much a fascination. My first exposure to Russian "cuisine" and "architecture" had been at a former pioneer camp in the 1990's, and I was just beginning to understand that I hadn't experienced real Russia at all. I hadn't even been to a tea party. But my interest lay in the background of ordinary Russian people. Maybe learning their language, culture, and history would give me some clues.

The Russian program turned out to be a great fit for me. Classes were small; professors were friendly; we could participate in forming the curriculum to meet our needs. I remember memorizing poems, singing "karaoke," and talking about all the dishes on a Russian holiday table. We struggled through Russian classics like New Year's movies, understanding only later that they were major cultural icons. We performed dialogues on video, did oral presentations, and had oral proficiency interviews to assess our progress.

During class we also enjoyed an amusing video series whose plot was laughable but taught us many valuable cultural lessons. We learned about Russian superstitions, intimate kitchen conversations, what to do in the banya, how to register a marriage in Russia, how to behave when you're a guest, etc. We practiced making toasts, negotiating taxi rides, and expressing various emotional responses to statements.

During my sophomore year I decided to major in Russian, while simultaneously being drafted to live in the Russian House....and becoming a Russian Club officer. The "Russian Club" ended up being a series of cultural events, often involving food. The VIP list included anyone who was taking a class remotely related to Russian. :)

In the Russian House, our cultural celebrations became all the merrier as we now had our own headquarters. The sign below reads, "Welcome to Maslenitsa-A Russian Celebration in the Spring." Note the piles of blini! I still don't know how to make blini very well, but I like to eat them. :) 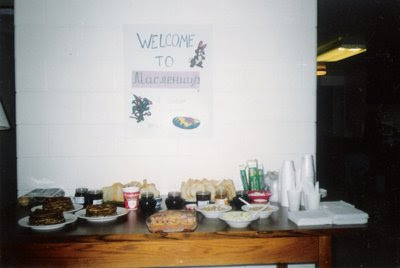 Alas, I don't have too many photos from that pre-digital era. But here is a photo from graduation, with one of my professors: 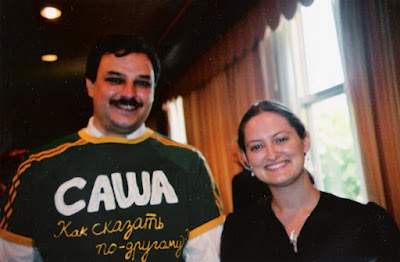