Border Trips in the time of Covid, Part 3 (Armenia)

I noticed that I often neglect to write about our interesting travels. A certain amount of time passes and then the initial impressions are lost. Sometimes it's just a matter of getting the photos off whichever device...

It's been 6 months and everything has changed again. This started out as a commentary on travel with coronavirus restrictions, and now there are many other restrictions. If Covid math for the past 2 years has involved PCR test processing and validity along with quarantine length, we now have to worry about closed airspace and places where we aren't welcome as a family.

But, back to November 2021 when it was still Covid but pre-conflict. 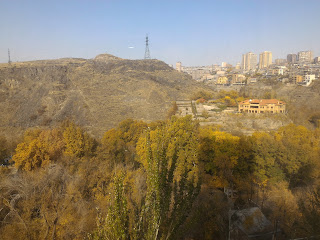 ...after our night in the hotel in Yerevan, we woke up for a day of tourism before heading to the airport. We enjoyed a full hotel breakfast buffet in the style that I've grown to love. None of that toast and jam here...try some hot porridge of your preferred type, make your own sandwich with a variety of cold cuts, or fix a plate of steamed hot dogs (David's favorite) with your choice of pasta dish or potato casserole. And then come back for more! I will admit that I like Scandinavian breakfasts a tiny bit more because there is usually some yummy smoked or salted fish. But any filling, savory breakfast is fine with me.

After breakfast, we had an hour to "get organized," which for me is always a pretty important/focused chore. I had also planned to map out our itinerary, figure out airport transportation, etc.

Then Andrei was looking at his phone and his bank had been reporting dozens of charges, leaving his balance almost at zero. Neither of us likes to handle these issues, but I also had to focus on packing everything up, so it really wasn't good timing.

I mentioned in the last post that we were having trouble keeping track of the exchange rate, and as we rushed to make calculations, the numbers seemed way too high for having withdrawn a little cash and eaten dinner. Armenia is fairly cheap, in general. So that didn't make sense. Meanwhile, we got a call from the front desk reminding us of the checkout time, which was fair, but didn't help the overall mood.

Our time was up, so we headed down to check out and get directions into the downtown area. Did I mention Yerevan is rather hilly and the streets are sort of on top of each other? We went the way we were told, down a hill by an abandoned amusement park that we hadn't seen in the dark the previous evening. Then we were supposed to get to town via a pedestrian tunnel. That tunnel....I'm glad we weren't walking through it at night, because we couldn't get out of there fast enough! At first, the end wasn't even in sight. Lots of graffiti, trash, etc. We emerged to see a cluster of dilapidated Soviet buildings. A few steps further and we were at a lovely park with fountains that would have been turned on if it weren't November. But some adorable fuzzy green sculptures made up for that. It reminded me of seeing cow sculptures in Budapest. It was really warm, by the way, probably in the 50s. 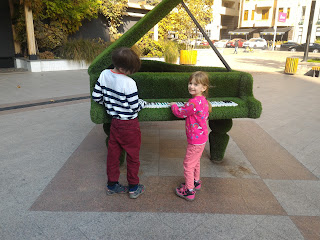 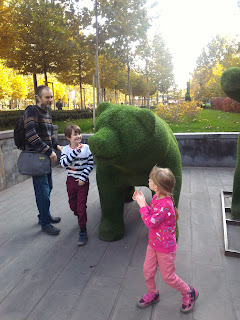 I started to get twitchy with time running short and wanting to do some sight-seeing before we had to head to the airport. The landmark that I chose was the Cascade, which is an interesting staircase structure that gives you a good view of the city. It took some time to walk there, cutting through parks and passing the Opera House on the way. Huge staircases must be a Soviet thing, as I remember seeing one in Odesa also (sob) when we were there a few years ago. That one is called the Potemkin Stairs and my husband used to see it in childhood when they would vacation on the Black Sea. 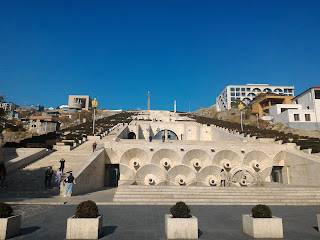 I was pleasantly surprised upon arrival to find upon that the Cascade complex contained a museum/cultural center of modern quality, in contrast to the rundown buildings we'd seen earlier. There was an exquisite-looking exhibit on the Armenian alphabet, which we didn't have time for, to my dismay. Inside the building, there was also a series of escalators to reach the top, each of them featuring a different modern art installation. 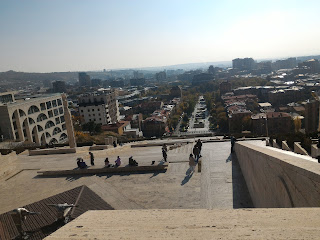 We visited the delightful gift shop as well, with its beautiful souvenirs and prices to match. We took turns browsing so as not to knock over expensive goods with our bags. 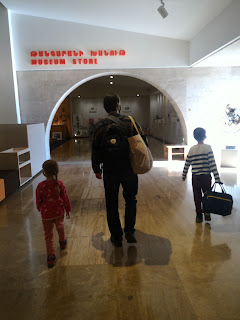 On our way back down, I was realizing that we not only had no time left for a leisurely lunch, but not even for some street food. In fact, we needed to get to the bus ASAP. We headed for the nearest metro station, Sophia crying all the way about wanting ice cream. The metro was small and quaint and reminded me again of Ukraine. We got off at the next stop and started asking people for directions, but the most common reply was that we had to go back to the same station that we HAD JUST COME FROM. But here we had only 5-10 minutes left and would likely not make it by the time we went down the escalator again and then up the escalator to get out.

Finally we stopped one family who shook their heads indicating they didn't speak Russian (unlike most locals). So we switched to English and learned that the young woman and her brother, accompanied by their father, had grown up NEAR BOSTON, MA (my home state) and were back in Armenia exploring their roots. Since I didn't have a taxi app installed, they took the time to call us a taxi and wait with us! We had a nice few minutes chatting and agreeing that our meeting was certainly orchestrated by God!

After a bit of a hubbub trying to get seated in the taxi while searching for my phone, which I had hastily shoved into a backpack section in order to not lose it, we were off to the airport. We had plenty of time, really. The taxi driver told us about the economic situation in Armenia (not great) and how during Perestroika, foreign investments had flowed into Russia and not into the former republics. That's another topic, but it's interesting to observe how different former republics have fared, which you'll see when I post about Estonia. Among many positive features of Armenia is its low crime rate, and the rumors of warm hospitality ring true.

We got to the airport, picked up our PCR results, and had time for ice cream before boarding our plane to fly over Mt Ararat at sunset again. 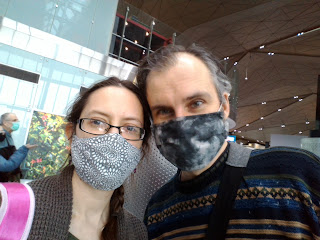 Although Yerevan felt a bit small and understated after St. Petersburg, I would love to go back and take some side trips to explore more of Armenia's history and natural beauty. 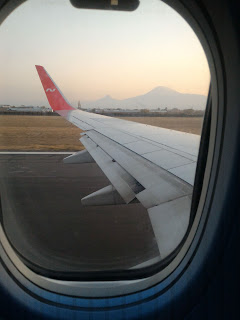 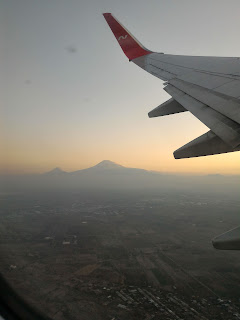 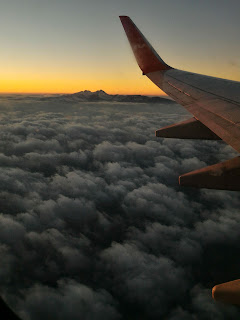 P.S. Since we visited, Armenia has become a haven for Russian political dissenters leaving their country, and the price of plane tickets has skyrocketed.

P.P.S. We eventually got the refunds to our bank accounts and it all worked out.

In the past month, it has been interesting to read the published thoughts of Russian friends as they've gotten their voice back upon es...