This was going to be a short and sweet "everyday life" post, but it ended up taking me a long time to explain a few photos!

Do you do spring cleaning? There are always a lot of projects around this time of year.

Some of my projects aren't so fun. In my Konmari tidying (using the term very loosely), I'm done with my own clothes and books and need to tackle papers. I got all the important documents out of the cabinet and they're sitting there waiting for me, but tonight I decided to blog instead. :)


Another category is old CDs. I already discarded some that required older versions of Windows. But I have to go through all the ones that might have files and photos, even though I probably have already copied a lot of them to an external hard drive. It's going to be tedious going through each one. I guess I'd better really discard the CDs this time so I don't have to sort them ever again! I'm keeping some music CDs for now, though.


I don't even attempt tidying "all in one go," but do you think it's really possible to tidy "once and for all"? I get the basic concept, but kids' stuff has to be gone through very, very often. I supposed if you are following a "one in one out" rule you don't have to go through the whole toy collection often, but I have trouble keeping up.

Anyway, I just went through the kids' clothes and gave away a bunch of hand-me-downs. I actually had David do his own clothes. I used to buy him a full wardrobe for the year, but lately he is very picky about his clothes. Although a lot of kids with sensory processing disorder like their clothes looser, David likes his sleeves to be cuffed and short enough that they never hit his wrists. And his pants have to be shorter and cuffed too, so they don't flap around. Long story short, I figured we could get rid of all the clothes that didn't meet those criteria. But surprisingly he kept more than I expected, even some nice button-down shirts. And he's been wearing a wider range of (decent) outfits that he has rediscovered. So, it's beneficial to involve your kids!


Now David's clothes fit in the top 2 (big) drawers and Sophia's fit in the bottom 2, so they can both independently reach their clothes.


Along with Sophia's clothes, we also moved her bed into David's room. However, she doesn't actually sleep there, she sleeps in our bed. I'm not sure how exactly to get her sleeping in her own bed! If I put pillows and blankets in there, she takes them out. She's actually using it as a doll bed right now! But I'm hoping if she kind of has her own corner in David's room, she'll eventually want to make it official;) Unfortunately we can't practice during naptime because she gave it up. :( More on that in another post... 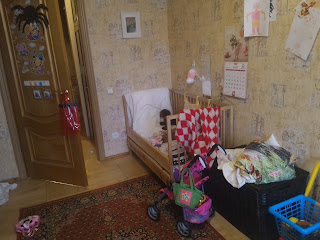 I go through the kids' books regularly, trying to keep up with their interests and developmental levels! It's been awhile since we purged. Just recently I got more out of storage for Sophia, and then culled some books that could become "readers" for when David is reading more independently. I figure taking them out of the current read-aloud rotation will help them seem more fresh later on.

Basically I'm always moving everything around...

Then I found a few books about Jesus and decided that they would go best with the Easter books, and then I got those out so they're ready for read-aloud. Even though we're already in Lent (started a week later than in the U.S.), I didn't want to start talking about Holy Week too early since we have so much time. Tomorrow is actually Purim and I might talk about it with the kids. And Passover starts in one month.

Last but not least, I'm LOVING my new kitchen carts. I didn't take a before picture, but all our windows have radiators underneath. So you can't put cabinetry, appliances, plumbing, etc. by the window. Not to mention, that space is wasted. And it's below counterheight too, which is awkward. Anyway, these carts added a ton of storage/counterspace, which is great, but I also realized that I LOVE standing by the window. I feel so much calmer when I'm doing food prep! Daylight! I know in the U.S. that's probably standard, but I think it was something that was really missing about our kitchen. I will add though, that in smaller apartments, there's usually a teeny little table by the window, where people will sit down to eat or chop ingredients. We're lucky we have a bonus area with a table, but the food prep area still feels kind of crowded. So, that's my fun addition!