Flying by the seat of my pants


Have you ever missed a flight? Now I know what that feels like. Read on...

It was our standard time to leave, but none of us checked the road conditions or had any idea that a MASSIVE construction project had been underway for the past few weeks. We certainly would have planned to leave earlier if we'd known! And the transport company definitely should have checked, too.

Soon after we got underway, the driver checked his GPS and realized we needed to take a detour. So off we went on the scenic route. I figured our extra hour would help, but the situation was more serious than that! We were creeping along on country roads. When we finally neared the city (Boston), we hit bumper-to-bumper traffic. I was avoiding looking at the GPS, but I saw how it kept recalculating. We were "10 minutes away" for about an hour! It was definitely torture knowing we were that close, yet stuck in traffic. There was absolutely nothing we could do.

Probably the worst part of the whole ordeal was the feeling of suspense as we waited helplessly to see what would unfold. My mom and I were texting the whole time and she had a lot of people praying for us. I knew nothing bad would happen, but I still didn't want to be in this situation. Even if we were going to make our flight, I didn't want to deal with the intensity of rushing. "I don't want to be here! I don't want to deal with this, Lord. I just want it to be over!"


As we approached the airport, I told Andrei that I would grab Sophia if he got the luggage, but I looked over at Sophia and realized I'd have to wrangle her out of her carseat, sigh. So it wasn't exactly speedy.

I somehow got inside with Sophia and there we were in the Delta terminal. You'd think we could run right in and make something happen, but no...it was chaos, but we had basically 3 options: the automatic check-in machines, the baggage drop-off, and "special services." That was it-no plain old check-in. For an INTERNATIONAL flight. It's important to note here that throughout the first 2 years of Sophia's life (she just had her birthday), we always ran into delays because of her being a "lap baby." Basically it's impossible to check in online, BUT I am always prompted to check in anyway, and then get some sort of unknown error...with every single airline! This time was no different, and I'd sort of checked in online, but gotten no boarding passes.

After asking an employee what to do, I sent Andrei with the bags to the special services line (it later came out that he'd searched for the end of the line for several minutes), since we had no boarding passes. I then used one of the machines to scan our passports. We didn't get boarding passes, but we got security passes that would get us to our gate. I asked another staff member what line we should be in, and was told to proceed to the baggage drop-off, another long line. If we were in Russia we would have waited in both lines, but I sent Andrei over to the baggage line, losing our place in the other. The baggage line moved slowly as the minutes ticked by. If we could quickly drop off our bags and go through security, we could possibly run to our gate in time. When we got to the front of the line, the agent told us her computer was giving her an error message. We had to go back to the special line. "The END?" "You can ask up front if they'll take you, but if not you'll just have to get in line." I went over to an agent who was helping someone, and asked if they'd take us since our flight was leaving soon. Nope, end of the line. Which we had been standing in before. Although we had lost our place, the couple we'd been behind had not moved very far.

I began to realize that the line we'd been sent to included people who were rebooking or had otherwise special conditions such as a large volume of shipping crates. Each case was taking 20-30 minutes to sort things out with an agent. There were 40-50 people in the line and only 3-4 agents. And we were stuck there because of the age of our child and/or needing our Russian visas checked, with no other staff to help us. No excess baggage, no issues. Just checking in for a flight.

The guy who had sent us to the baggage drop suddenly started calling out to see if anyone was on a London flight. "We're on the 7:06 to Amsterdam!" I called out. He looked down and shook his head-"oh, you're too late." Well, THANKS! He scurried away but I eventually got him to come back. "Why did you send us to the other line? What are we supposed to do now?" "You'll have to rebook," he said. So we stayed in the line as our plane boarded.

It was our turn. I mumbled that we had just missed our flight but had been sent back and forth to different lines. "What time did you get here? ""5:30." I had a bit of a moral dilemma there with giving truthful information (and it may have been 5:40-still 90 min ahead of our flight), but I think that had things been more organized, we could have still made our flight. From hints of conversation here and there I figured out that lots of DOMESTIC flights flying to and from other areas of the U.S. had actually been grounded due to weather, stranding people, who were then standing in the same line as us. Which seemed like a waste-although rebooking can also be time sensitive, people with plenty of time were ending up missing their flights.

"She did ask like 3 people. I can vouch for her," said another customer being helped at the next desk. That was comforting! I DID try! And they COULD have gotten us on our plane. Maybe it's not fair to give people priority, but we were in the line unfairly as well. Meanwhile, the agent called over Line Guy and asked if he had sent us over to the baggage line. "Yes," he admitted. He'd thought they would try it and see, or something. But the point was that he'd been wrong. And everyone had been wrong-although an error message eventually came up, no one could just come out and say that we belonged in X line for X reason. As they bickered, I regained a sense of hope: the disorganization was bad, but actually took the blame off of us for being late.

An important looking lady came over and looked at the screen and also asked when we'd gotten there. "5:30" I said, knowing she wasn't going to miss anything. "That's kind of late for an international flight," she said...BUT continued to proceed with rebooking us, free of charge.

Our flight options were: hop on a flight leaving shortly, then (after the overnight flight) hang out in Amsterdam for 12 hours until the next connecting flight, and arrive in St. Petersburg around midnight. OR stay overnight and catch our same flight 24 hours later. Who wants to hang out in an airport for 12 hours with 2 kids? Not me. So we chose to stay overnight. At first they claimed the hotels were full, but then Boss Lady came back over and got on the phone and got us a room! Again, free of charge. As it should be, but still nice to feel taken care of.

We went downstairs, learned that the shuttle would be another hour, and then got some food from Dunkin Donuts, as we hadn't had lunch or dinner. I think I felt calmer at that point: the major decision-making was over, we had a place to spend the night, and we did not have a morning flight to lose sleep over. Not that anyone slept, of course! 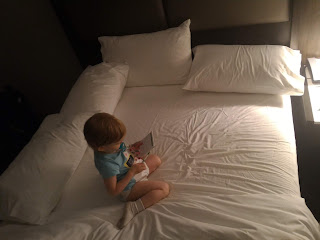 To be continued...(it may take several days as we're headed to the airport again in a few hours...long story...)