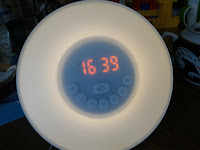 As I wrote about last month, for January I focused on changing family sleep habits. Specifically, mine and Sophia's were problematic. Of course Andrei is also sleep-deprived on a regular basis, so he also benefits from Sophia sleeping better. But he controls his own sleep habits. ;)

Ironically, we flew to the U.S. on January 30, resetting our internal clocks. But I guess you could say it was the perfect final "exam"! :)

Surprisingly, both kids slept well while we were in the U.S. Sophia did not have her usual "happy hour" in the middle of the night. However, this meant that she was waking very early the first few mornings and I got to experience what so many parents of early-bird toddlers complain about. I went to sleep early, but still found it hard to get up early. Even when we started sleeping a little later, I found myself prone to morning melt-downs. I'm definitely not a morning person! And I also wondered, is there something wrong with ME or is it just a matter of whether the crankiness happens in the morning or afternoon?

Now that we've been back in Russia for a week, Sophia is starting to sleep better. However, this is thanks partly to my meticulously planning and limiting her naps. It is counter-intuitive for me to do this, but it has gotten her sleeping at night again. While she had fought her second nap for several months, I finally learned that is it actually the MORNING nap that should be dropped, making more awake time in the first half of the day rather than the second half. I also read that there should be about 4 hours of awake time between the last nap and bedtime. We'd been doing it the opposite, napping earlier and then crashing an hour or two before bedtime. I think we're on the right track now!

I also have to admit that waking up earlier does lead to better nighttime sleep. It is hard to fit that into our lifestyle where we like to have 8 pm leisurely dinners (and 10 am leisurely breakfasts). But we are closer to figuring it out.

One more thing I should mention is light therapy! When we were in the U.S., I purchased 2 cheap sunrise alarm clocks to try*, and a nice light therapy lamp. Of course I fried the lamp by sticking it into the socket with the wrong voltage. :( As for the clocks, I turn them on sometimes to brighten the room when we need to wake up. I set the alarm on two occasions and found that the light woke me up immediately instead of gradually over the 30 minute period as it promises. David kept sleeping, though. Anyway, I might try a more expensive model and see if the sunrise function is more gradual. I didn't want to get something pricey since the kids would probably break it anyway. At any rate, it's much lighter in the mornings now, so we almost don't need it! Not until next winter.

I didn't really explain what the light therapy is for but the sun lamps are supposed to help with SAD. And just being around brighter light at certain times of day is supposed to help you set your internal clock and give you that "wake up" message. I definitely need SOFT light before bed to help me sleep, but I haven't figured out yet whether brighter light in the morning helps me wake up.

-waking up earlier
-avoiding caffeine before bed
-limiting naps, at least long enough to stop mixing up day and night (for me naps ruin my bedtime, though)

Things that help me get to bed on time:

-kids' bedtime going faster so I can have some time to wind-down before bed
-avoiding my computer...which is kind of a catch-22 because if I limit Sophia's nap then it's harder to fit computer time in, which leaves more to do in the evening. Balancing act!
-waking up earlier so I'm too exhausted to procrastinate in the evening


Might help with quality of sleep/feeling rested but not general schedule:


Do I feel more rested? Yes and no. Waking up earlier and having bedtime happen faster makes the day SEEM more productive, and feeling more productive makes me feel more relaxed. However, I haven't caught up on sleep enough to say that I don't feel groggy/sluggish in the morning and throughout the day. I hope with time that will improve. I'm tired of feeling sleepy!

Overall I will say the experiment was satisfying because I tried to solve the problem from all different angles, and learned some new things. Of course having Sophia sleeping better is an accomplishment within itself! I'm not doing as well with February's challenge, which I will write about soon.


*Funny thing about ordering 2 "different" alarm clocks: they turned out to be almost identical. Chinese companies ripping each other off, I guess! This seems to be a common occurrence on Amazon, as I had also run into this issue while ordering David some headphones for watching movies. Same exact product sold by 2 or 3 completely "different" companies!