Yesterday we were halfway through Advent! And we're nearing the shortest day of the year, which is always a bit of a relief once we're past it.

I've been encouraged by how we've been able to observe Advent this year. David (almost 5 1/2) is able to participate more and take initiative, and his enthusiasm somehow soothes the usual loneliness and dreariness this time of year.

Part of why I didn't write this post earlier is that I wanted to include a few visuals. You may recognize some of our same old decorations from other years, but there are always some changes.

I enjoyed Callie's post about enjoying Christmas as an adult, and I have to say that many of the same principles apply for me, so here is our version.

Going to all that work to get out/sort decorations (if they're mingled like ours) and arrange them, only to enjoy it for a few weeks? Nope, we have to be able to enjoy them for at least a month, in my mind! I also realized that Christmas decorations and "hygge" go hand in hand, and the lights and candles help bring some comfort in the winter darkness. So...the earlier, the better! This year I got everything out right away heading into the first weekend of Advent. It's not a strict tradition or organizational thing, but rather a way to survive and thrive.

-Involving others (or not):

I've set myself up for disappointment in the past, expecting other family members to be just as involved in planning Advent. This year, I took the majority of it into my own hands, running errands such as buying Christmas lights for our new-to-us artificial tree! However, David is also old enough to get excited and help out. I gave him tasks such as arranging the Christmas magnets on the fridge, or decorating the coffee table (which was dismantled quickly by the toddler). 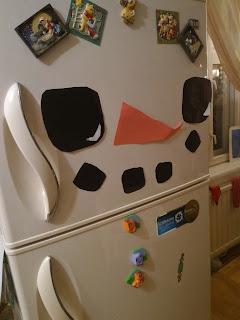 I have to say that David has a nice eye for design. He is really into patterns but is a bit of a minimalist. Anyway, it's great when additional creative minds join in!


-Choosing Advent materials that we can actually keep up with:

We have 2 Advent "calendars" that are made up of little (teeny) booklets with a reading for each day. They can be hung on the Christmas tree or elsewhere (we stuck some in the pockets of the wall calendar). We also have a felt Jesse Tree with accompanying study materials, but haven't kept up with that. The booklets are what has stuck, so we've been doing those each night and David even reminds me about it. We've also been lighting the Advent candles regularly, and they're burning pretty low so we might have to replace them! 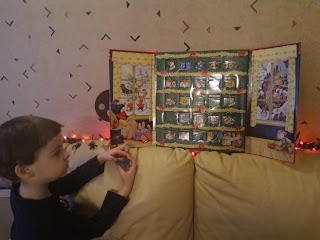 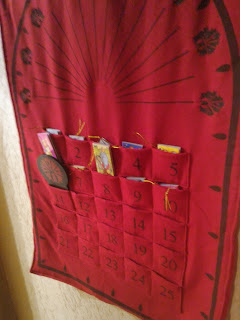 Along with the Jesse Tree, we have tons of decorations that are either breakable or that I was just too tired to put up. Most of the tabletop stuff in general doesn't really go anywhere. Maybe next year! Meanwhile, outings like Christmas concerts and even regular church attendance aren't working out for this year either, nor singing in the choir. There are some neighborhood events, but I don't know if we will venture out. I'm not even going to go into gifts and Christmas cards...in short, they probably won't happen. Ideally I'd love to make a few handmade cards, but it might have to wait for next year.

-It's my first time in maybe 10 years having a Christmas tree! Some missionaries were moving away last spring and sold us their artificial one and Andrei went and got it for me. :) I'm pretty excited about it, if you couldn't tell. However, the other decorations are nice too and a tree certainly isn't essential...and also not childproof!

-We do the Christmas bedtime books too, of course. Every year I buy a few new ones (but I don't wrap them in wrapping paper or anything). I decided to skip the board books with David this year and just do the regular picture books. Maybe I will do a post sharing some of our favorites. I was thrilled this year that one of David's favorites is a simple retelling of the nativity story. He asks for it over and over again and even quotes it throughout the day..."Daddy, how do you say FOREVER KING in Russian?" Something I didn't mention in my post is how much more David seems to understand about the meaning of Christmas. He even notices sometimes that the more secular decorations don't have much to do with Christ's "birthday." It is nice for once that not all of the ideas are just coming from me. 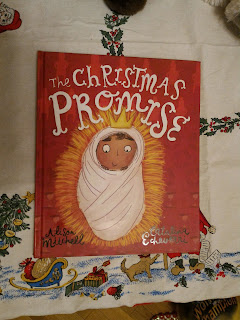 -We made a gingerbread house for the first time in a few years. When I say made, I mean I bought a "kit" with the house pieces, and brought some meringue powder from the U.S. to make royal icing. David was fine decorating on his own, but it only took about 15 minutes! Though I think partly he wanted to make sure there was some candy left over for nibbling. ;) There were some gingersnaps from the store and he decided to decorate those, too. And I realized that storebought cookies are so much easier since all you have to do is slap on some icing and sprinkles! Not sure if we will attempt cut-outs this year.


So there you have it. I'll try to post a life update soon!