Well, that week flew by! I guess it got taken over by Women's Day, a church function, and registering the kids' passports.

So, the run-down on our daytrip to Finland. It was boring, hooray. I didn't even take any photos except on the train.

We decided to give our beaten up umbrella stroller one last run (we ended up getting another one the next day), figuring we could ditch it and use a soft carrier if it fell apart. It held up, though. Sophia was alert for the train ride as it wasn't yet her usual naptime, but then went to sleep.

Everything went fine with border control. There were a couple funny things about the train such as it not having a baby changing station despite it being the family car. It was way easier having 2 adults, though the train ride was only 2 hours. I think the hardest part was getting on and off and riding the metro to the actual train station. 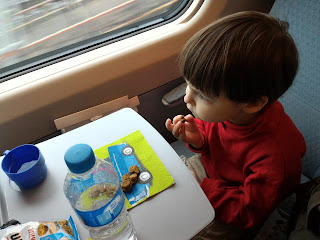 We went to the same small town in Finland and again I was struck by how quiet it was. Such a relief after being in a big city, like someone had hit the volume button. The weather was just as grey, though. And without big-city sights to provide a little color in the winter, I think it would be a little dull. Definitely pros and cons. I liked immediately noticing ethnic diversity-not that it's absent in Russia, just a different mix. The little stores downtown had so much character, and that's something I miss about living in a small town, buying from local artisans and things like that. If we'd been in a car I probably would have made quite a few purchases! But as it was, our budget went towards train tickets and lunch, and our hands were full from carrying emergency changes of clothing. Oh, and apparently I'm supposed to notify my bank a week before entering a new country, which I had failed to do.

We visited a nice restaurant that I had found on the internet. It felt a little odd being alone there on a Saturday, and I wondered what Finns do on weekends. Were they all out skiing? Home doing chores? Out shopping? But we just relaxed and enjoyed it as Sophia took her nap in the stroller.

We still had about 2 hours and decided to visit the Railway Museum. But once there, we realized we didn't have the motivation to even go inside. David was having great fun running up and down their handicapped ramp and was disappointed that we were leaving. But it was cold outside! So we went to the train station and sat in the waiting area, and David and I went up and down the escalator and elevator and staircase.

On the ride home everyone was a little cranky, of course. But I really felt for a lady sitting near us whose toddler had not napped. She tried the whole way to put him to sleep, and he was only getting drowsy at the end, when it was after 7 pm.

At the next opportunity, Andrei and his father went to the Immigration Office to register David and Sophia at his parents' address.

Now we need to look into getting them permanent residency so that we don't have to always be counting days in and days out. But I think it may be a long process-no fast lane even though they're Russian and I already have permanent residency.