Our recent trip to the U.S. (which we arrived home from about 10 days ago) had to be timed very carefully, as it interrupted the school year. We also had the following to accomplish:

-travel before mid-October (when David's old visa would have run out)
-be in the U.S. in early October for my cousin's wedding on the West Coast
-arrive in the U.S. sometime before that, to get over jet-lag and get the visa application in the mail
-travel on a day when Andrei would be free to see us off
-be in the U.S. long enough for the visa to be ready, without having to expedite
-avoid arriving in Boston during a Red Sox game
-avoid early morning flights
-have Andrei arrive and fly back with us during a week when he has the fewest amount of lectures to reschedule


So, we did just that. Here is how we passed the time (sorry, can't get photos in order): 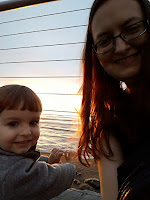 1) Bureaucracy: Upon arrival, we got David's visa application together. That thing kills me every time! There is always one more copy to make or page to print out, and the margins on the application were all messed up, etc. Also, David had a mosquito bite near his eye that swelled up, and we were desperate to get passport photos, so...for the duration of this visa, he's the boy with the puffy face.

2) Family again: My family reunited once more, this time for my cousin's wedding in California. It was another long trip to make with David, although nothing like the 8-hr plane ride from Frankfurt. It was definitely hard to be at a major event without Andrei, but I was still glad I finally got to see some extended relatives (who live all over the U.S.) and be there for the special day.

3) New England fun: The next 10 days flew by as we prepared for Andrei to come and met up with various friends, and even had a playdate at a pumpkin patch with David's cousin, Benjamin!

4) Family of three: Andrei joined us for the last week to fly back together. Needless to say, he was quite tired, and the week was packed with activities and social events that we could enjoy as a family. The trip back was smooth but tiring, and we were thankful for the lack of complications! Happy to have no travel obligations for the next 6 months or so...


New England in the Fall


St. Petersburg actually has some pretty fall colors, too. With the popularity of Instagram and other social media, I'd say the beauty of all those fall snapshots are pretty much identical across the ocean, though the pumpkin obsession is noticeably absent.

But still, it's New England in the fall! And there are mountains!

I just realized that I never once went to Dunkin' Donuts when I was in town. Sniff.

But I did have mulled apple cider! And plenty of autumnal squash. And homemade bread.

The other thing about this time of year is Homecoming/Alumni weekend for my alma mater. I was finally stateside during the right time of year...but too far north. Unfortunately we weren't feeling up to more travel, and ended up flying back to Russia as Homecoming was beginning in VA. But Andrei ended up having lectures the first weekend back anyway.


It's always good to be stretched and attempt some "firsts" in parenting. David and I flew to the U.S. by ourselves and had 3 weeks without Andrei. With my parents helping, it was doable, and the hardest part was nighttime, especially with the jet-lag at the beginning. David was sleeping horribly and having crying/screaming fits in the middle of the night. Finally I would put a favorite kids' show on my phone for him and he would calm down as I dozed off. But even with lying down with him during the day, it was hard to get enough sleep! I was recovering from strep throat and worried about a relapse, as the fatigue set it. After the first 4-5 days it started to get easier. When we returned to St. Petersburg David had the same problem with adjusting, and Andrei had a pretty heavy workload!

But in general we did well and bonded a lot and had some fun adventures!


When I used to visit the U.S., my calendar would fill up with social appointments! Exhausting, but fulfilling. Since becoming a wife and mother, my energy hasn't held up so well for visiting, which also used to happen if I was only around for 1-2 weeks. But this time I had enough time to get over jet-lag, and with Andrei gone I needed to fill up my days. So I was able to see a lot of old friends! It's bittersweet because when I see them, those few hours whet my appetite for fellowship. And we talk about getting together again, but rarely can that become a reality. The reality is the hope of heaven, where we will never run out of time and never be separated again. That's the way I imagine it, anyway.